The Houston Astros are celebrating the franchise’s 50th anniversary this season and what better way to commemorate this special occasion than to have players don throwback uniforms for Friday home games?

There’s no doubt that the throwbacks would spark fond memories for lifelong fans that have followed the team over the years.

But, Houston we have a problem.

That is, the throwback jerseys are not authentic replicas.  An emblematic part of the uniform was omtted: the smoking revolver.

See, before the Houston Astros were the “Astros,” they were known as the Houston Colt .45s, which was the team’s name for the first three years of its existence.

And the team’s original uniform (as you can see by the pictures) had a smoking colt revolver right under the letters: “Colts,” with the gun smoke forming the letter “C.”

Why was the gun removed from the throwbacks?

Well, Astros fan James Crabtree, outraged by the decision, wrote a letter to the team and to MLB commissioner Bud Selig requesting answers. 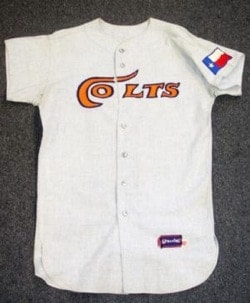 He got one from Mike Acosta, the Astros’ authentication manager, who told him, “During our discussion with Major League Baseball, it was expressed to us that we could wear the uniform as long as the pistol was removed. We realize this changes the original design, but we still want to honor the Colt .45s. We are also under an obligation to follow Major League Baseball’s requests.”

To translate, MLB is arguing that in today’s politically correct times it would be offensive to the public if there was a firearm on the front of a baseball uniform (yes, even in a gun-loving state like Texas).

But putting politics and political correctness aside, there’s another point to be made about the throwback uniform: the aesthetics.  That is, they look stupid without the gun.

As one ESPN blogger said, “What’s the point of having a “C” formed by a whisp of gun smoke when there’s no gun to produce the smoke?”