Designed to be fast, what would become the PT boat was determined in the early ’40s during the so-called “Plywood Derby.”  The Navy held trials for competing designs off the coast of New London in July 1941.  In the end, many contracts were awarded to several companies of note to produce PT boats.

PT boats were used to attack destroyers.  They were extremely small, hard-to-hit targets that carried a devastating payload.  Inspired by small anti-naval craft of World War One, the U.S. used PT boats to harass and destroy ships that, on paper, outclassed them in every way, shape and form.

The average PT boat was armed with two, three, or four Mark 8 torpedoes for the majority of the war, which had a range of about a mile and a payload of over 200 pounds of TNT.  Later they’d be designed around the Mark 13, with a range of over three-and-a-half miles and triple the payload.  We shall not forget the ’50s.

All PT boats were equipped with twin .50 caliber Browning machine guns.  Because Browning is boss.  Depending on the model, they were mounted in different ways, but you can be damn sure that every single one of them was armed with the U.S.’s longest-serving gun due to its capacity for owning the opposition.

Built in Maryland and restored in Florida, Hammacher Schlemmer’s latest addition to their catalog is retrofitted PT-728. 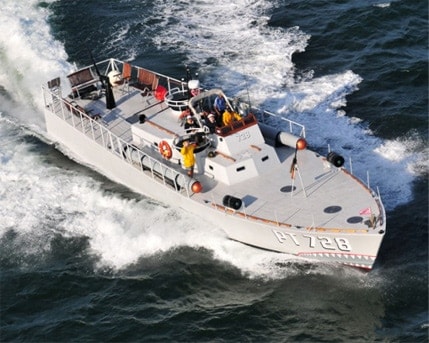 Hammacher Schlemmer, a historic New York based retailer, is selling the renovated PT boats with all the combat fixins–the .50s have been deactivated (‘course, if you can afford this PT boat, that can be corrected) along with the torpedo tubes and depth charges.

These beauts are built in the Annapolis Yacht Yard using a 72’ British Vosper design. They have a hard-chined, triple-ply mahogany hull that’s nearly flat at the stern.

It allows the boat to plane on top of the water at speeds up to 42 knots (or about 48 mph), a speed capable of outrunning enemy torpedoes (In fact, these boats were so fast that they compelled Nelson Rockefeller to buy and convert one for high-speed commutes between Albany and New York City). They’re also updated with modern electronics, radar, and two turbo-charged diesel engines providing 1,100 total horsepower. 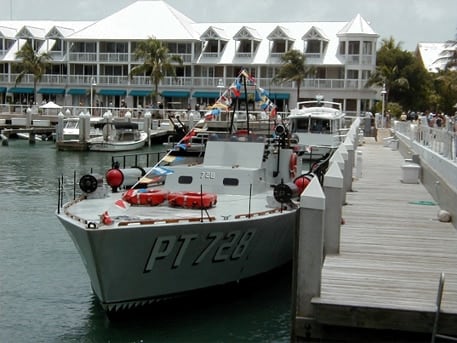 Going rate is a cool mil, but to own a PT boat you’ll also own a small slice of history.  If you wind up with this particular 728 though, do go ahead and reactivate those deck guns.  You’ll be glad you did…