The Caracal C and F Now Available in Stores

We got to shoot the striker-fired Caracal C and F at SHOT Show this year, and we gotta say, it was nice.

There are six models of Caracal pistol, with two available in the U.S. now and another coming soon, as in later this year.  The Caracal pistols have straight-forward nomenclature, F for full-size, C for compact, and SC for subcompact in 9mm and .40 S&W.  The two Caracals you can get right now are the F and C in 9mm. 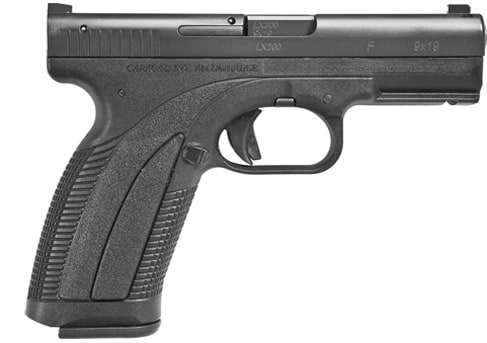 Caracals have a very stout construction where the polymer grip wraps around an internal steel receiver, like SIG P250 and the new Beretta Nano.  This internal receiver is one piece and acts as the slide rails, too.  It’s very long and gives the Caracals some of the longest rail radii of all polymer pistols.

But the thing that makes these guns stand out the most is the trigger.  There is a slight take-up, just tension not grip, then a pop.  While the trigger is technically double-action only, it feels like a long single-action trigger.  Long for a 1911, anyway.  It’s also extremely light for a service pistol at about 3.5 pounds.

The 9mm F has an 18+1 capacity, a 4.1-inch barrel and an overall unloaded weight of just 26 ounces.  Caracals are extremely simple firearms with a total of 28 parts not including the magazine.  That’s actual parts, not assemblies; the number 28 includes springs, pins, and every other discrete part. 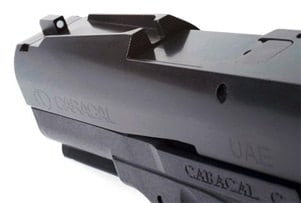 The C has a 15+1 capacity, 3.6-inch barrel and weighs 25 ounces dry.  One of the things that makes the Caracal C so interesting is that as an option you can get it with Caracal’s “Fast Sights”.  They’re aptly-named.  Both the front and rear sights are milled into the slide forward of the ejection port.

It is possible to focus on both the front and rear sight at the same time, meaning we were running up and down the plates as fast as we could keep the Caracal C fed.  It doesn’t hurt that the bore axis and slide mass are both so low that recoil is as non-existent as it can possibly get with this pistol.

All of the sights are pretty routine, 3-dot, front fiber-optic black tactical, or figure-8 style sights in white dot and tritium vial are all made by the factory and will be standard options down the road.  Right now it seems as though the Cs and Fs available come with figure-8 white dot sights, which does keep the price down.

Caracal said that their pistols would have sub-$500 price tags and they kept their word.  Although they have an MSRP of $720 for both the C and the F, the real-world price we see on shelves is more like $450, which is very competitive with other similar service pistols.  They come with two magazines, a case, a lock, and a speed loader.

We hogged Caracal’s booth at this year’s SHOT Show, and ever since we’ve been daydreaming about these pistols non-stop.  We do hope they get popular because of all the new pistols we got to see and try, this is one of the few that’s really deserving of a following and a strong aftermarket.  Really, that’s our only complaint; they’re new and good luck finding a holster.

Other than that, we loved shooting Caracals and no one should pass up the opportunity to put some lead downrange if they get it.  That is, unless you’re opposed to buying another pistol, if that’s the case, avoid these handguns at all cost.