A few weeks ago, he showed up outside Broxton Bridge Plantation near Erhardt, S.C., to launch his remote-controlled aircraft with attached video camera to record what he called a live “pigeon shoot” held at the private plantation.

Hindi wanted to use the footage to expose the animal “cruelty” that occurs at these events.

See, from Hindi’s perspective, pigeon shoots are “nothing more than a vile excuse for entertainment for the dull-witted or psychopathic.”

Adding that they are “illegal in other countries and in all but a couple of American states, most people realize the despicable nature of these bird-killing contests.”

The owners of the plantation, along with their attorney and some local law enforcement, tried to stop Hindi from launching his Mikrokopter drone, but it didn’t work. 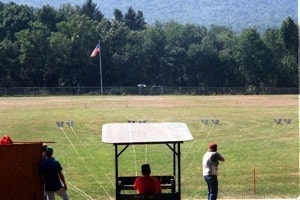 As it turns out, what Hindi was doing was perfectly legal.  Not only was it legal at the state level, but also at the federal level as well.

As it turns out, President Obama signed a law this month that compels the “Federal Aviation Administration to allow drones to be used for all sorts of commercial endeavors – from selling real estate and dusting crops, to monitoring oil spills and wildlife, even shooting Hollywood films,” the New York Times reported.

So Hindi’s snooping drone aircraft was free to fly.

Knowing that they could not get rid of Hindi, many of the participants left the plantation.

“Once they knew nothing was going to stop us, the shooting stopped and the cars lined up to leave,” Hindi told local reporters.

Not convinced that everyone had left, Hindi launched his drone to spy on the remaining shooters, but soon encountered problems.

“Seconds after it hit the air, numerous shots rang out,” Hindi said in the release. “As an act of revenge for us shutting down the pigeon slaughter, they had shot down our copter.”

According to his reports (and as you can see in the video), the shooters were “in tree cover” and “fled the scene on small motorized vehicles.”

“It is important to note how dangerous this was, as they were shooting toward and into a well-traveled highway,” Hindi stated in the release.

One of Hindi’s underlings at SHARK filed a police report with the Colleton County Sheriff’s Department.

If caught or identified, Hindi is hoping to file charges against the shooters as his drone was damaged to the tune of $200 to $300.

“This was SHARK’s first encounter with the Broxton Bridge Plantation, but it will certainly not be the last,” Hindi said in the release. “We are already making plans for a considerably upscaled action in 2013.”

SHARK has at least one well-heeled supporter joining its aggressive campaign against sportsmen who shoot pigeons.  Bob Barker, former host of “The Price Is Right” has donated $1 million to the cause.