Daniel Defense is offering four rifle packages for law enforcement that cover just about every role an AR-platform rifle ever could, from long-range to up-close social work.  They’re complete with everything from spare mags to carrying bags. 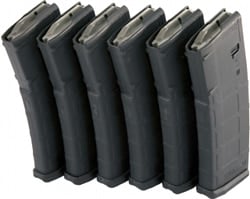 The Designated Marksman is for your long-rage shooting needs, believe it or not, the Rifle Patrol and Rifle Light Weight rifles are standard government-profile carbines, and the Rifle Special Service is a short-barreled rifle (SBR) destined for close-quarters work.

All of the rifle components are mil-spec or better, and come with enlarged flanged magwells and M4 feedramps.  The barrels are chrome-lined for longevity and heavy phosphate coated with a 1 in 7-inch twist.  They are also MP, HP and MPI-tested.  They all have direct-impingement gas systems, low-profile gas blocks and free-floated barrels.

The handguards are Daniel Defense but the buttstock as well as the sights and six magazines are Magpul.

The Designated Marksman rifle package uses a mid-length gas system and has an 18-inch barrel.  The handguard is modular and can be configured with different rail systems.  It has three sighting systems, backup iron sights, (BUIS) a Bushnell Elite Tactical 2.5-16×42 mil dot scope for precision shooting, and an offset Elite Tactical TRS-25 3 MOA red dot sight for special occasions.

The Rifle Patrol and Rifle Light Weight rifle packages are fairly similar in size but different function.  The Rifle Patrol, which includes model DD M4 V1, has a fixed front sight and aside from the rail, is very much a government profile carbine.

Besides being lighter weight, mostly due to the lightweight-profile barrel, the Rifle Light Weight, which includes model DD M4 V5, has flip-up iron sights and a mid-length gas system.

The Rifle Special Services package is your SBR.  It’s got an 11.5-inch barrel with a carbine-length gas system.  It, like all the other rifles, has both BUIS as well as a TRS-25 3 MOA red dot.  The DMR package comes with a Bobro quick-detach bipod, whereas the others have optional Magpul forward pistol grips and Daniel Defense rail covers.

These rifle packages are for law enforcement only, and as such are sold at a discount accordingly.  Daniel Defense doesn’t want to disclose their prices but we have a ballpark on them, and if you’re a LEO and don’t have a rifle, you owe it to yourself to call and ask.

Same thing goes to you, department armorers.  Daniel Defense’s prices are just a hair over what it would cost to build them yourself, including the whole mess of accessories, but, you know, come with a guarantee and warranty.