New York City has some of the toughest gun control laws in the country.  As some tourists have learned recently, unlawful possession of a firearm is a serious crime.

In many instances there’s mandatory minimum sentences of 2-3 years in prison, and up to 15 years in prison for those who are suspected of having criminal intent.

In many ways, Mayor Michael Bloomberg has made carrying a firearm in New York City a very risky enterprise.

The hope is that this will curtail violence and crime.  That by making it virtually unfeasible for criminals to carry weapons, there will be less gang-related violence.

But criminals and gang-bangers are resourceful.  They’ll always dream up new ways to fleece the system and circumvent the law.

A recent article in the New York Times pointed out the latest adaptation against Bloomberg’s efforts: an increasing reliance on “community firearms.”

“Hidden and shared by a small group of people who use them when needed, and are always sure to return them, such guns appear to be rising in number in New York,” the Times reported.

The author of the article seemed puzzled as to why it’s happening.  “It is unclear why. The economy? Times are tough — not everyone can afford a gun.”

But this doesn’t make much sense because criminals don’t go to Wal-Mart to purchase firearms.  They simply go out and steal them as needed.

The reality is that with more police officers patrolling the beat, doing stop-and-frisk procedures, the risk of getting caught with an illegal firearm has increased.  Add to that the severe punishment one faces, it makes little sense to carry 24/7.

So, instead, criminals just hide guns on their local turf, in strategic locations, in places they know they can easily get them:

“Wheel wells,” said Mr. Talty, an assistant district attorney in the Bronx, “The bottom of a light pole.”

“Garbage pails are a big one,” said Capt. Richard Dee, with the Police Department’s Gang Division. “A hallway radiator.” 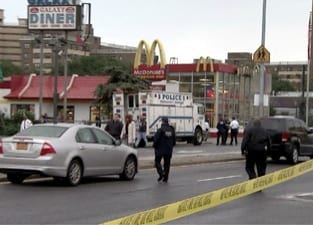 “Behind some bushes or under a building,” said State Senator Malcolm A. Smith, who has visited the scenes of shootings in his Queens district that were linked to community guns. “Somewhere where you can essentially borrow it for an hour if you need to use it.”

“One guy will hold the gun down,” Captain Dee said. “They call him the ‘holster.’ Often, it’s a female. Someone who is above suspicion.”

Now this makes perfect sense for a criminal or gang-banger, he’ll shirk responsibility and give the gun to his girlfriend to let her assume all the risk of being caught.  Of course, if he has a tumultuous relationship with her, this strategy could backfire.

With more gangs and street thugs adopting this communal approach to arming themselves, ballistic matches are on the rise.

“We get a lot more ballistic matches than we ever have before,” Lieutenant Ruane said. “It’s amazing. You go, how the hell did that match up to that shooting? It’s a different command, a different borough, Brooklyn or something.”

At the end of the day, this should serve as a lesson to Mayor Bloomberg.  That is, criminals will always find a way.  And if they can’t find a way to circumvent the law, they’ll outright flout it.  Therefore, it makes little sense to deny law-abiding citizens their fundamental of self-defense.