Last Thursday, the Minnesota Senate approved a bill that would expand self-defense rights outside the home for law-abiding citizens.

The Personal Protection Act, as it’s known, was passed by the Senate 40-23. The bill gives citizens the right to use deadly force for personal protection outside the home to any place where an individual lawfully can be, the bill’s sponsor Sen. Gretchen Hoffman (R-Vergas) told local reporters.

“This bill isn’t just about guns, it is about allowing any use of deadly force if necessary to guard against imminent danger,” Hoffman added.

A version of the bill was approved by the state House last year.  However, the Senate version will go back to the House for a final review.  If the House approves it, then it will head to the desk of Democratic Gov. Mark Dayton.

Gov. Dayton has not indicated whether he will sign the bill, but told local reporters that he usually sides with police officers, many of whom oppose the measure.

While Minnesota currently has a ‘Castle Doctrine’ law, proponents of the bill argued that it’s not enough.

“Current law favors the criminal. With the duty to retreat, you put the onus on the victim,” Hoffman said. “We need to empower people to protect themselves.”

Opponents of the measure have nicknamed it the ‘Shoot First’ bill.  They contend that current law provides sufficient protection for Minnesotans and that the law opens up the door for risky behavior. 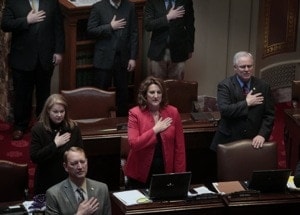 “I don’t think that’s the intention of the bill, but that’s the loophole it creates,” he said.

Hoffman countered these arguments by explaining that a court would still decide whether or not an individual acted reasonably in using deadly force to defend himself/herself.  Moreover, that the bill includes language that states a person cannot use force against someone they “know or reasonably should know” is a peace officer.

We’ll keep you posted on the progress of this bill.