Sleeve Guns: Concealed Carry with a Trick up its Sleeve

While British Army Officers first coined the phrase “sleeve gun” during World War II to describe any weapon designed specifically for assassination purposes, today it is commonly known to be a small firearm held in place by various holster rigs and devices attached to one’s forearm.

Sleeve guns are usually meant to be hidden under garments such as long sleeved shirts or coats. Quick draw sleeve guns make use of delivery mechanisms that can take a gun from concealed carry to open carry in less than a second (and give the gizmo a very cinematic air).

As Seen on TV

Though sleeve guns (also called “wrist guns”) played prominently in films such as Taxi Driver, Alien Resurrection and Desperado, the gadgets first moment in the spotlight came back in the 1965 in the television series The Wild, Wild West, staring Robert Conrad as the character James West.  Conrad used the devices in several of the episodes usually holstering a Derringer, though in some episodes his sleeve holster held gadgets such as acid laden squirt guns, blades and ninja-style climbing claws.

These theatrical portrayals cemented the gun’s image as a weapon for rogue operators playing by their own rules—the perfect combination of deep concealment and quick access, both a covert hit man’s tool and a last resort self-defense weapon. Today, those strange devices used by Robert Conrad in ’60s television are now on display at the CIA Museum in Langley, Virginia.

To many though, the most alluring aspect of the sleeve gun is the do-it-yourself nature of the device.  Though commercial examples surely exist (Guns.com couldn’t find any though), sleeve gun rigs are “traditionally” cooked up in a basement workshops and custom built for the user. Owing to this, the actual component parts scavenged to assemble the device vary greatly, but the most common component used in constructing the sleeve gun is a sliding rail from a desk drawer.

The rail is disassembled and sawed-down to forearm’s length. It is then modified to prevent parts from sliding off during use. Many parts are fabricated from scratch for the firearm holder and the ejecting mechanism. The mechanism is triggered by releasing a spring that holds the firearm under the wrist. The gun itself is ‘activated’ by either pulling the ring attached to a metal wire or just the sudden movement of the forearm, using the force associated with “flipping” the arm out to propel the gun down the slide.

But I expect the question on everybody’s mind—never mind the movies or long ago cancelled western television shows—is this: are sleeve guns a serious option for concealed carry today?

As an undercover officer I was once required to carry a type of sleeve gun. It wasn’t spring-loaded (I’ve always been suspicious of these), but just a small .22 LR Derringer attached to a makeshift rubberized holster that wrapped around my left forearm. I have to say that it was pretty darn comfortable but, in hindsight, probably not too practical (it was only accessible using my right hand, and fishing up my sleeve).  I never did use it. 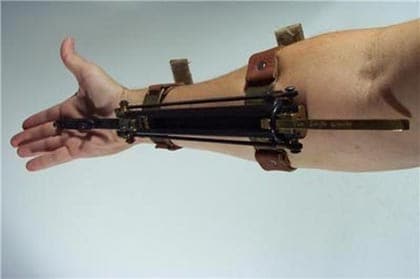 When we think of concealed carry, I seriously doubt many of us have thought about wearing a sleeve gun. More than likely, our concept of a concealed firearm is one where the weapon is concealed in a shoulder holster, ankle holster, on the hip covered by outer clothing, in a fanny pack or perhaps a handbag. By contrast, the forearm seems like a very awkward carry place a weapon for any extended period of time (just think how much you use your hands in day).

However, it’s important to realize concealed carry does not discriminate against sleeve-carried weapons—it doesn’t discriminate against anything really—and, after all, if a pistol can be carried concealed in an ankle holster (an awkward place to draw a pistol from in its own right), why wouldn’t the forearm also be a feasible carry option?  As you’ve heard many times before on this site, terrain and situation dictate tactics.

And so does the law, but, irrespective of states like Illinois that do not allow concealed carry, period, Guns.com can find no readily apparent reason why sleeve rigs cannot be used to carry concealed.   So, knowing this, is a sleeve gun in my future?

Well, maybe but probably not. For one thing, those spring-loaded devices don’t look all that reliable to me and, short of that, the sleeve holster would be akin to the thing I wore while working undercover, hidden up my left arm and only accessible by my right hand. To me it just doesn’t seem to make much sense, but you might disagree (and have good reasons as to why).