A Georgia judge is being investigated for brandishing a pistol during a hearing in which an alleged sexual assault victim was giving testimony on the stand.

“It was totally inappropriate conduct for a courtroom,” Langley added. 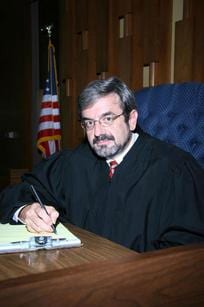 The undisciplined conduct by Judge Barrett occurred at a bond hearing this past Wednesday.  The case involves a former Hall County sheriff’s deputy, Scott Sugarman, who is being brought up on a number of chargers, including rape and aggravated assault with a handgun.

At the hearing, the woman was requesting a temporary protective order against Sugarman.  She claimed that Sugarman had abused her and, on one occasion, had put a gun to her head.

But later on in her testimony she became uncooperative, at which point Judge Barrett told her she was “killing her case.”  Judge Barrett then pulled out his gun, feigned to offer it to her, and said, “You might as well shoot your lawyer.”

Upon seeing the gun, District Attorney Langley approached the bench and told Judge Barrett to holster the firearm, which he did.  The hearing continued without further incident.

The woman’s lawyer, Andrea Conarro of Dahlonega, said that her client – whose name has not been released because she’s an alleged victim of a sexual crime – thought Judge Barrett was testing her.

“My client thought it was a test, that he was trying to see how she would respond, like it was a credibility determination,” Conarro said.

Looking back on the incident, Conarro also expressed concern for Judge Barrett.

“Later, as it sunk in, I was upset, and I felt like a tragedy had been created,” she said, adding that by “tragedy” she meant what could happen to Judge Barrett because of what he did.

The Associated Press reported that Judge Barrett is now under investigation by the state Judicial Qualifications Commission, which probes judge misconduct.

While Georgia law allows judges to carry concealed handguns on the bench for personal protection, it is a crime to point a gun at another person if there’s no cause to do so (whether or not he actually pointed the gun directly at her is unclear).