In fevered moments of frustration, when the better angels of our nature are overcome by rage, we’ve all said and/or thought things we’ve come to regret.

The other day, for example, my girlfriend said to me, “I could kill you right now!”  Did she really mean it?  No, I don’t think so.  Although, I left the toilet seat up, and she sat down (without looking) and, well, I suppose I wouldn’t have blamed her if she tried to off me right then and there.

All joking aside, there are people out there who really want other people dead.  Many of you would argue that “yes, there are, these people are called sociopaths.”  And I wouldn’t disagree with that.

However, there are other would-be killers who don’t fit the stereotypical mold of a sociopath.  That is, they don’t have Hannibal Lecter’s serial killer sapience or the Anton Chigurh’s dead-eyed glare.  For lack of a better characterization, these people are seemingly normal, everyday people that simply want someone dead.

A recent article published in the LA Times highlighted a website that was created to service the needs of those people.  The name of the website: hitmanforhire.net.

“Thanks to the Internet, ordering a hit has never been easier,” read the gimmicky introduction to the site, the LA Times article reported. 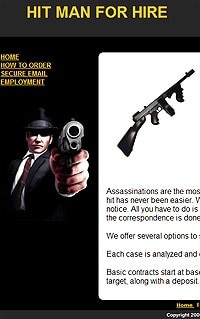 The website was launched in the early 2000s by a 51-year-old Las Vegas poker dealer, Essam Ahmed Eid.   And before authorities in the Ireland arrested the international hitman and sentenced him to six years in prison for extortion and burglary, Eid’s killing business was doing quite well.

(Note: Last year, Eid was extradited to the Los Angeles to face similar chargers.  He pleaded guilty to conspiracy relating to extortion and received a 33-month prison sentence.  He is now serving time in a federal prison in Mississippi.  But he can be released as early as Nov. 2013, according to the LA Times).

One of his clients was Irishwoman Sharon Collins who had hired Eid to kill her lover, P.J. Howard, and his two sons.  During the legal proceedings, details emerged about the specifics of the hit in email correspondences between Collins and Eid.

In one email, Collins wrote, “His boys are going to suffer. I wish it didn’t have to be like this, but I know that if my husband was dead and they were still here, they’d screw me.”

She even explained her reason for ordering the hit in the first place, which included a desire to inherit Howard’s fortune (apparently he was worth upwards of $10 million), but also because he allegedly wanted to “control every part of my life.”

“The main reason I’m doing this is because he is continually trying to force me to go out and pick up a stranger for sex…. The mother of my boys is not a slut,” Collins exclaimed in an email.

Collins gave Eid a brown paper bag filled with 15,000 euros to get the job done.

Another one of Eid’s clients was a woman named Marissa Mark.  She wrote an email to Eid saying, “I need someone by the name of Lauren Royston killed ASAP. She is located in Los Angeles, CA.”

Eid never managed to kill any of his targets, but he did try to extort money from them.  He told them that someone ordered a hit on them, and that he could take the target off their backs if they paid him money.  But Eid’s attempts at extortion backfired, as the targets alerted the police. 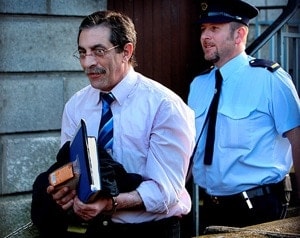 So, what could the Gun Community learn from this story?

First, threats come from all places.  So, be vigilant and be prepared.  Looking at the pictures of Mr. Eid, one would not suspect him to be a hired assassin.  Nevertheless, that’s what he was attempting to be (There were reports of him trying to make homemade silencers from toilet paper and obtain the deadly poison ricin).

Second, hell hath no fury like a woman scorned.  From what was published, it appeared that most of Eid’s clients were women (including a fifth grade girl that wanted one of her classmates killed, see LA Times article for details), women who felt slighted in someway.  The key here is to never burn a bridge and always treat people with respect, especially women.  Had Ms. Collins and Ms. Mark been treated with more respect would that have stopped them from ordering their hits?  Probably not, but in general the better you treat people, the better you, yourself, will be treated.