OpticsPlanet has been a first-rate supplier of gun and shooting accessories with a long list of happy customers.  Now they’ve started to market a product you can accessorize, but it isn’t a firearm: it’s the OPMOD Battle Mug. 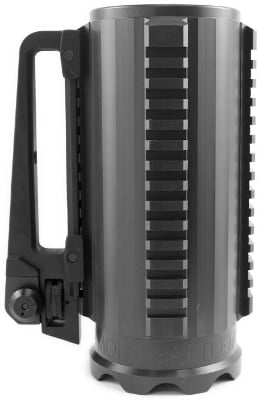 The OPMOD Battle Mug is milled from a single billet of 6061 T6 aluminum, the rails are Picatinny—MIL-STD-1913 rails—and the finish is Type III hard-anodizing.  And it has a generous 24-ounce capacity.  The base is crenelated as a stand-off device.

Although the mug is rated to contain any beverage fit for consumption, the aluminum construction lends itself to cold drinks, as it’s an excellent heat conductor and can easily transfer heat to anything part of your face that comes into contact with the OPMOD Battle Mug.

The OPMOD Battle Mug is a limited-edition product, and because of its precision construction and extreme rugged construction, does run at a price premium.  OpticsPlanet is selling their Battle Mugs for $250.  They do come with one AR/M4 rear sight carrying handle and qualify for free shipping.

The Truth About Guns acquired one for field testing and did some, well, some pretty harsh things to their Battle Mug.  We don’t recommend that anyone else follow suit, but for the sake of scientific knowledge, it is probably better to know that the Battle Mug isn’t indestructible and will fail in extreme enough conditions.

The OPMOD Battle Mug bears more than a passing resemblance to another tactical portable beverage containment system introduced last year, the Battle Mug.  So much so that we believe that the OPMOD version is being made under contract to OpticsPlanet’s specifications by the original Battle Mug developers, Battle Mug.

Prices between the Battle Mug variants are roughly on par with each other, although in some configurations the original can be had for a little less.  Also, Battle Mug’s Battle Mugs are available in a dog-tag version where the owner can affix one of his or her tags to the bottom of the tankard to personalize it.

No matter what, Battle Mugs are clearly here to stay.  The next wave in fighting beverage consumption is the Battle Mug and it’s far ahead of the rest in terms of what features it brings.  There will be those who say there are advantages to traditional drinking vessels, and while we don’t disagree, the truth is that the Battle Mug’s durability and flexibility will make it the mug to beat for years to come.