The Arizona police sergeant who posted a picture of an Obama T-shirt riddled with bullet holes on his Facebook page has been suspended and demoted, according to officials.

Pat Shearer, a 25-year veteran of the Peoria Police Department, has been suspended for two weeks without pay and demoted to the rank of officer.

“We expect our employees to exercise sound judgment and not bring discredit upon our police department,” Police Chief Roy Minter said in a written statement.

The infamous photo (pictured above) showed a group of young, casually dressed high school students brandishing firearms and holding up a T-Shirt with Shepard Fairey’s famous portrait of Obama.  Below the image of Obama is the word “HOPE.”  The shirt appeared to have numerous bullet holes. 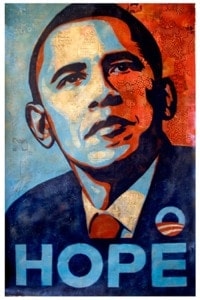 The Secret Service caught wind of the photo and, following protocol, immediately launched an investigation into the matter.

“Any time information such as this is brought to our attention, where an individual or a group expresses unusual direction of interest in one of our protectees, we conduct appropriate follow-up,” Max Milien, a spokesman for the Secret Service, told POLITICO on Friday afternoon.

“This posting falls into that category. We’ll conduct the appropriate follow-up measures on this,” Milien added.

When asked about the intent of the photo, officer Shearer told ABC15 in Phoenix, “I don’t think that the shooting of that T-shirt is that big of a deal.”  Adding that, “It was more of a political statement.  It’s not like they were going to go out and shoot the president,” he said of the teens.

But the Secret Service investigates all potential threats, even those that appear to have been made in jest.

The Secret Service has told Reuters that it’s not pursuing any action against Shearer.

In the past, officer Shearer has risked his life for others, according to the Peoria Police Department.  He was honored in 2007 for rescuing a person from a burning car.