The Leupold Mark 4 HAMR: Rugged Enough for the Marines

The Leupold HAMR scope was introduced about this time last year and it’s made its way now into some very capable hands.  Designed for military use, the fixed four-power (4x) optic is extremely compact for its class and makes mid- and long-range shooting a snap. The benefits of using a fixed-magnification optic are improved clarity, greatly reduced distortion, and brightness. 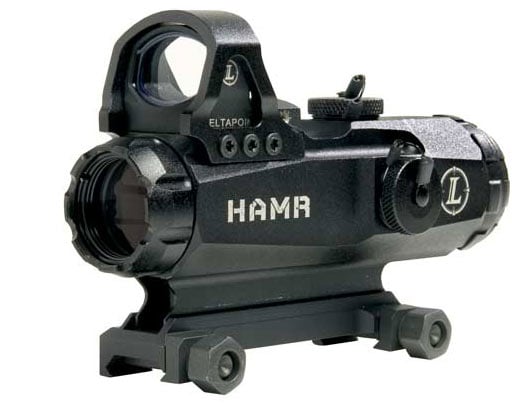 Of course, the optic is too far zoomed in for up-close work, which is why the HAMR also incorporates an optional low-profile non-magnified red dot sight.  Leupold bundles their DeltaPoint reflex sight with the HAMR, which is available with either a 3.5 MOA dot or 7 MOA delta reticle.

The HAMR has a powered center reticle, a horseshoe with a dot at its center, and has range marks out to 800 meters.  At just 5.5 inches long and weighing only 13 ounces (15 with the red dot) the HAMR is smaller and lighter than most 4x optics while offering the same level of magnification.  It’s also rugged enough to let Marines have them; it’s being considered for the Marine’s new SOPMOD Block II accessory kit, which is still under development.

Over at The Firearm Blog they’ve got a couple of beautiful shots of the HAMR in action rocking the pants off a fully-SOPMODed-out M4 carbine.  Although it’s probably worth mentioning that he bought it for himself, along with that Magpul hardware. 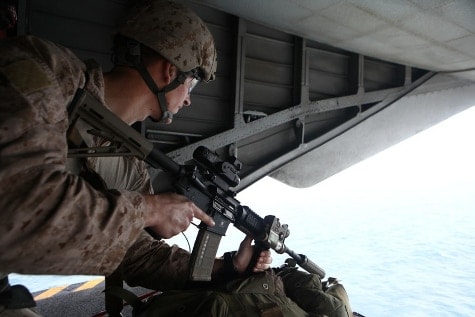 You too can acquire a HAMR of your own but be prepared to drop significant coin.  A HAMR with a DeltaPoint will set you back at least $1350, although you can get the base optic without a red dot sight for about $1100.

Leupold’s optics have always been a hit with the Navy and the Army as well.  It seems like the HAMR is coming into its own, and it’s priced competitively with other combat optics like the current-generation of Trijicon ACOG 4×32 rifle scopes.

If you were to drop upwards of a grand on an optic for your AR (or M4), what would you pick?