Spying seems to be hardwired into Russian DNA and for decades the USSR and now Russia have sent Combat Divers a.k.a. “frogmen” on clandestine missions to infiltrate other countries’ military complexes by using their harbours as a gateways to enemy naval bases.

Because of the aggressive nature of their missions (they are the invaders after all) these Spetsnaz (Russian special operations) units are armed with specialized APS and ASM-DT underwater rifles. 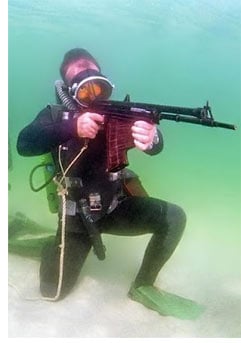 The APS underwater rifle, developed in the mid 1970s, was Russia’s first attempt at an underwater long gun and the world’s first movement towards an inert projectile based underwater rifle (like those commonly used above the surf) rather than a rocket or spear-gun concept (in the 1960s, the US had toyed around with Gyrojets, a family of underwater firearms named after the method of gyroscopically used to stabilize its projectiles.  The weapons proved too inaccurate and the project was abandoned).  The express purpose of the APS underwater rifle project though was to improve the range of the underwater SPP-1 underwater pistol—about 50 feet when submerged.

The most important aspect to achieving this was designing a receiver that worked underwater.  The structure of the receiver has to allow water to move easily around its parts as water cannot be compressed like air (which is why conventional firearms have a pitiful lethal range of about three feet when fired underwater).  The Russians solved the problem by leaving the receiver open at the rear.  The weapon operated on a gas discharge principle using a control that regulated gas output, allowing it to work on land as well, firing 26 steel bolt caliber 5.66 mm magazine fed rounds out of an unrifled barrel.

At Least it Works…

The result proved to be more powerful than the SPP-1 with a lethal range of about 100 feet underwater, but it was also unwieldy when submerged as manoeuvring underwater was difficult and somewhat-less-than-accurate on land because the gun lacked rifling. Of even more concern to Russian military was the fact that, though the APS could shoot out of water, its lethal range did not exceed 50 meters in the field.  Also, dry land firing took a serious toll on the “open” mechanics of the gun and the rifle’s lifetime dropped from 2,000 shots underwater to 180 shots in air.

The Russians immediately tried to make improvements to the design with varying degrees of success. For example, later models used a perforated gas pipe to muffle the gas bubbles emitted from the shot. This made target reacquisition easier and allowed for a stealthier shooting experience. In the end though, the APS failed to catch fire amongst Russia’s military elite and though the gun was adopted as the official weapon for soviet Combat Divers, most actual Russian Frogmen carried the tried-and-true SPP-1 with an AK-47 in a waterproof case rather than the APS rifle. 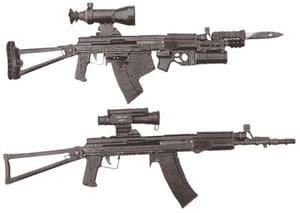 The development of Russia’s first specialized amphibious weapons (rifles that can be fired underwater and on dry land) began in 2000 with a rethink of their rudimentary APS underwater rifle, and over the course of the decade, this new genre of rifles would come to be known to the world as ADS dual-medium/amphibious/underwater assault rifles.

The Russian engineers at KBP (Instrument Design Bureau) in Tula, south of Moscow, began their quest for a wet/dry operation weapon with a basic Russian A-91 (A-91M) bull pup configuration and determined that the new gun needed to fire any standard issue 5.45 X 39 mm (ball, tracer, AP) round above the surface as efficiently as an AK 47, even after just emerging from the water.

Like spying, Russians also have a reputations for engineering brilliance, and early on in the ADS’s development, KBP’s design experts realized the key to solving the dual environment challenge lay in the standardization of the below and above water cartridges—using the same cartridge size but different bullets in the brass—rather than only designing the gun around the problems associated with shooting underwater. 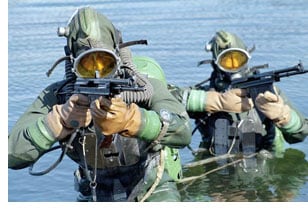 In 2005 KBP unveiled an innovative PSP underwater cartridge with a lethal range of 25 meters. It was the same configuration ammunition as the AK with an overall cartridge length of 57 mm (meaning it fit all AK magazines).

The bullet in the PSP round however is 53 mm, giving water room to move around the projectile, and elongated back inside the cartridge, providing the hydrodynamic shape to make it deadly underwater.  Like most strokes of genius, the Russian solution to the air/water quandary was simple: just switch magazines.

When firing underwater, frogmen use the same 26-round magazine as the APS however when the gun is fit with a 30-round AK-47 magazine, the mag release shifts forward and the gas system automatically adjusts for firing in air.

Unlike the smoothbore APS, the ASM-DT’s barrel has shallow rifling. In addition to increasing accuracy on dry land, these grooves allow gases to be expelled in front of the bullet, blowing any water out of the barrel and eliminating the need to drain or dry the rifle before use.

Today, the ASM-DT amphibious rifle is still in service with the Russian military though availability and pricing information for this secretive weapon is limited.  Known accessories include a GP-25 grenade launcher, bayonets and suppressors.