Japanese weapons designer Yujiro Komuro designed the Hino-Komuro pistol in 1903, and his pistol went into production in 1908 and stopped in 1912.  An estimated 1,200 Hino-Komuros were manufactured but fewer than 30 remain in existence today.  The Hino-Komura is somewhat unique in its operation, as it is a true blowforward handgun, an operation that never really took off. 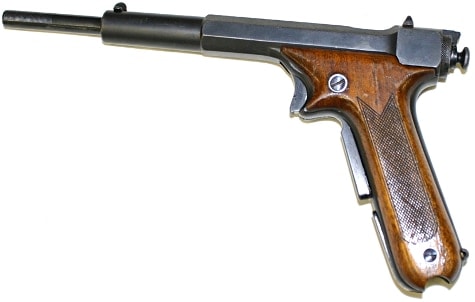 Friction and pressure from bullet traveling down the barrel as well as gas pressure from the burning charge push the barrel forward, which lifts a follower with the next cartridge into place at the breach, which eject the spent case out of the gun.  Once the barrel has traveled forward it locks into place until the trigger is pulled again.

In the case of the Hino-Komuro the frame and barrel shroud are all one piece.  The breech is screwed into the rear of the receiver, and into that, the firing pin.  Everything goes out the back for disassembly.  The Hino-Komuro was mostly chambered in .25 ACP and .32 ACP, although it was also offered in 5mm (probably 5mm Clement according to Forgotten Weapons) and 8mm Nambu, the latter which proved to be too powerful for the design. 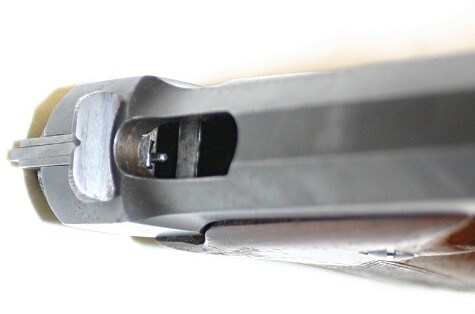 Like blowback pistols, the only thing holding the breach closed is spring tension and inertia, so the design was inherently limited to low-power chamberings, which is one reason it never succeeded as operating cycle system.  That and you have to touch the barrel in order to cock it, which means sticking your hand right at the muzzle of the barrel, which probably also gets pretty hot if you try to get in some good range time.  Impractical.  Interesting, but impractical.

The designs for the Hino-Komuro 1908 were destroyed during WWII, as were many of the surviving pistols due to the Japanese prohibition of firearms; in 1992 the Japanese police destroyed ten of the handful of existing Hino-Komuros because they were not registered.

That being said, the fine people at Forgotten Weapons were loaned one of these extremely rare pistols and made this video of it.  They also have some pretty good closeup photos of the pistol.

The Hino-Komuro is so rare that you might not ever see one in person, so thank you, Forgotten Weapons, for giving us this footage of a gun that has almost been lost to time entirely.