Iowa House Democrats Storm Out of Capitol over Pro-Gun Bills

Claiming House Republicans ambushed them by bringing two pro-gun bills to the floor without prior notice, Iowa House Democrats stormed out of the Capitol in a mass walkout this past Wednesday.

Several hours later, the Democrats returned to the Statehouse and the bills passed the Republican-controlled House without further theatrics (Republicans have a 60-40 majority).

So, in a sense, the mass exodus of all 40 House Democrats served no purpose other than to delay the inevitable and, perhaps, to cause a scene.

At the Wednesday press conference, House Minority Leader Kevin McCarthy characterized the bills as eliminating “all gun laws, gone, not through legislation, but through altering the Iowa Constitution.”

“We left in protest so that there could be some openness and transparency and some sunlight drawn on what this issue is: very, very extreme,” he said.

To shed some light on what all the fuss was about, the first bill was House Joint Resolution 2009: Iowa Right to Keep and Bear Arms State Constitutional Amendment.

Since Iowa is one of six states without the right to keep and bear arms in its constitution, lawmakers felt it necessary to establish this fundamental right.  However, opponents of the proposed amendment took issue with its unequivocal and explicit language:

“The right of individuals to acquire, keep, possess, transport, carry, transfer, and use arms for defense of life and liberty and for all other legitimate purposes is fundamental and shall not be denied or infringed.  Mandatory licensing, registration, or special taxation as a condition of the exercise of this right is prohibited, and any other restriction shall be subject to strict scrutiny.”

“For far too long, we’ve seen judicial abuse of our Second Amendment,” said Rep. Matt Windschitl (R-Missouri River) one of the bill’s sponsors.  Rep. Windschitl also rejected notions that this new amendment would pre-empt all of the state’s gun laws as Rep. McCarthy intimated at the press conference.

The second bill, House File 2215, would remove a person’s “duty to retreat” from an attacker, giving citizens the right to stand their ground and protect themselves and their family anywhere they are lawfully present. 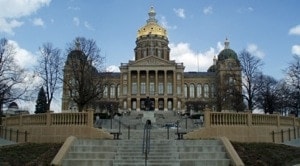 Additionally, the bill would modify Iowa self-defense laws to create “a presumption that an individual who unlawfully or forcefully enters your dwelling, place of business or employment, or occupied vehicle is there to cause serious bodily injury or death, so the occupant may use force, including deadly force, against that person”.

Lastly, House File 2215 would enhance legal protection for individuals who use justifiable force against an attacker.  It passed the state House by a vote of 60-38.

On Thursday, McCarthy spoke out about the measures once again, describing them as “extreme” – even for a “lifetime NRA member like himself.”

“I think their proposal is wackadoodle, OK? It’s way out, way out far-right,” he told local reporters. “It’s tea-party extreme, and we wanted to bring some sunlight to that.”

Although the bills passed the House, they face a rough road ahead in state Senate where the Democrats hold a narrow majority, 26-24.  We’ll keep you posted on the progress of these bills as they make their way through the Senate.

If you live in Iowa, you may want to get on the horn with your state Senator and tell him/her to support these measures.