The U.S. Mint Making New Coin to Honor the Infantry

One hundred seventy-four Infantrymen who graduated February 17th were each presented with the U.S. Mint and the National Infantry Museum and Soldier Center’s newest commemorative coin, the 2012 Infantry Soldier Silver Dollar.  It is a limited run of 350,000 and is available for purchase from the U.S. Mint’s catalog. 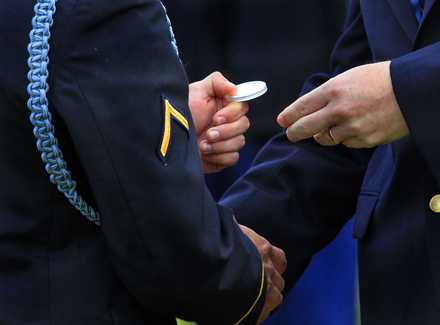 “It’s sort of a physical embodiment of our accomplishments,” said Pvt. Aaron Sallee, F Company, 2nd Battalion, 19th Infantry Regiment, after being handed his coin, reports Military.com.  “Words can’t really describe how it feels being a new member of the Infantry. It gives me a great sense of pride.”

“It represents ideals shared by Infantry Soldiers and American citizens—ideals of courage, pride, sacrifice and sense of duty. It will be a very special memento to Infantry Soldiers past and present, a reminder of their service to the nation. There probably isn’t an Infantryman alive who wouldn’t cherish this piece. The added benefit is that $10 from every coin sold will help support the National Infantry Museum and Soldier Center, whose mission is to preserve Infantry history and educate Americans about the branch’s 237-year legacy of valor,” said retired Col. Greg Camp, the National Infantry Foundation’s vice president and chief development officer.

The coin’s obverse side (heads) features a modern Infantry soldier armed with an M4 rifle on rocky ground charging forward and beckoning the troops to follow, symbolizing the “Follow Me” motto of the Infantry.  The reverse side (tails) is minted with the crossed rifles insignia, flintlocks, the branch insignia of the Infantry. 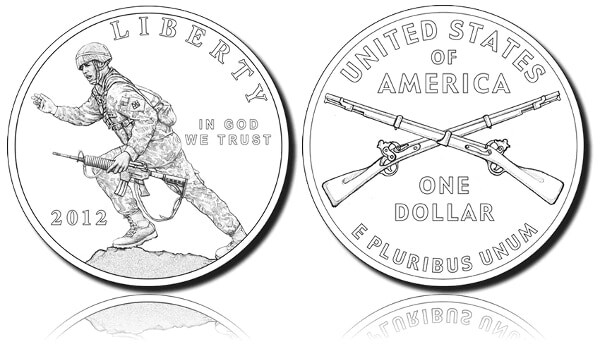 The commemorative coins were authorized by Public Law 110-357, the National Infantry Museum and Soldier Center Commemorative Coin Act, to honor the service and legacy of U.S. Army Infantry soldiers, according to BouillonStreet.

You can buy an uncirculated coin straight from the U.S. Mint’s online catalog here.  The price is $45, including the $10 donation to the National Infantry Museum and Soldier Center.