Response to ‘High School Shootings: Should We Focus on Gun Ownership or Gun Safety?’

School shootings: what’s the answer?  How do we prevent them?  Those are questions that everyone, no matter which side of the gun issue one is on, wants answers to.  There’s got to be a way to keep individuals like T.J. Lane, the Ohio student who shot dead three of his peers and injured two more last week, away from firearms.

I know what some of you are probably thinking: allow teachers and faculty to carry concealed at high schools.  Logically, this would make would-be shooters think twice about bringing guns to school to exact extreme acts of violence.

While there is certainly some validity to this argument, I wonder if it’s enough.  And I wonder if, as gun owners and as parents, uncles, aunts, cousins, etc., we can do more.

The reality is that we are a gun culture.  Growing up with guns and around guns is, for many of us, a way of life. 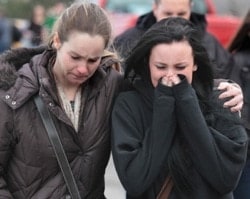 In her article, ‘High school shootings: Should we focus on gun ownership or gun safety?,’ Janice D’Arcy of the Washington Post pointed out statistics that show just how much exposure children have to guns:

More than a third of homes where children live have guns stored there, according to a 2000 study published in the American Journal of Public Health.

She then follows it up with a rather obvious conclusion, “Those statistics suggest we need to do much more in regard to gun safety. Talking to kids is a good start. But we need those guns locked up and out of reach.”

I would agree with those suggestions, but I would really underscore the talking to kids point.  The key is to educate, educate, educate the child on guns and gun safety.  On the whole, I believe progress is being made on this front, as accidental gun deaths were at a record low last year.

But I think there’s another aspect to gun safety in addition to education and keeping guns locked up that doesn’t get enough attention.  And that’s vigilance.

As a society, I don’t think we pay enough attention to our environment and the potential threats within that environment.  Sure, we watch our kids (some of us do, at least), but do we pay enough attention to their friends?  To their friends’ friends?  And what about teachers and administrators?  Surely, they need to do a better job of keeping an eye on troubled teens.

As Colin Goddard, a survivor of the Virginia Tech Shootings, said in an interview with CNN, in almost all school shootings, the warning signs were there, the writing was on the wall.

Arguably, T.J. Lane was no exception to the rule.  Several months ago, in Dec. 2011, T.J. Lane wrote on his Facebook page, “Feel death, not just mocking you.  Not just stalking you, but inside of you.  Wriggle and writhe.  Feel smaller beneath my might.  Seizure in the Pestilence that is my scythe.  Die, all of you.”

Clearly, this is not something to ignore.  But, it was ignored or dismissed.  No one followed up to the extent required to prevent a tragedy.

While we can’t watch everybody all of the time (to be clear, I’m not arguing for Orwellian style surveillance), we can certainly do a better job of looking out for warning signs.

As it specifically relates to the gun community, I think we need to do a better job of reporting and discussing instances where gun owners acted offensively/proactively to prevent a tragedy.  That is, they alerted police and/or authorities about a potential threat (if you have a story, please share below).

We tend to glorify stories where gun owners acted in self-defense (typically with deadly force), and while these deserve mentioning, we also need to be reminded that the ideal scenario is where no one gets injured or killed, where a gun owner acted proactively to prevent something bad from happening.

We must remember that a responsible gun owner is not someone who is just prepared to take a life, but one who is also prepared to save a life.

Lockup your guns, educate your kids, and be vigilant.  If we do these three things, and do them with care, we stand a better chance at thwarting school shootings.