Having resided there for a number of years, Illinois is a state I would say I’m pretty familiar with, yet when it comes to attitudes about firearms, gun ownership and gun laws, the land of Lincoln never fails to leave me scratching my head.

Case and point, I recently read an article in the Rockford Star newspaper about the future of concealed carry in the only state that does not issue a CCW permit. The article noted that, “Women who log onto an Illinois State Police web page will find that they are advised to protect themselves (in case of sexual assault) with a ‘rat tail comb, keys, pens and pencils’ against an assailant armed with a gun or knife. As a last resort, women are told to put their fingers into their throats and to make themselves vomit, apparently to make themselves less attractive.”

Well, I thought I’d seen it all from the Illinois political establishment by my jaw dropped when I read this and as a writer for Guns.com, I felt it was my duty to dig some more. 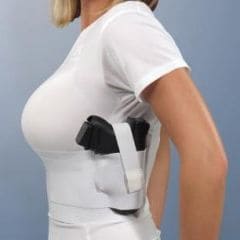 I checked the Illinois State Police website but that didn’t provide an awful lot of information (as it turns out, that particular state police web page was taken out of circulation just as soon as the complaints started flowing into the Springfield office after the article ran and the link in the original article to the Illinois State Police website goes to a dead page).  But a quick phone call to a trooper in Springfield, Illinois yielded fruit.

I asked a trooper point blank why the police would endorse such ineffectual defense strategies to combat rape when the lawful application of deadly force would solve the problem better. He explained that for all intents and purposes the state police “don’t expect ladies to be armed, so there must be some useful alternatives.”  And this sends a chill up my spine because in a state that does not allow its citizens to lawfully carry real self defense weapons, the Illinois State Police line almost has to be that combs and pens are the alternative to guns (though I’d fight with them over the word “useful”).

I will not divulge the trooper’s name because I understand full well that he has to follow the policy of his paymasters (as a one time Rhode Island State Trooper, I know because I’ve been there), but I will say it’s mystifying to me how some people can arrive at the conclusions they do, especially about something so serious as rape, and though I understand the legal reasons behind the cops’ recommendation that women use toiletries to ward off 250-pound rapists, I find the response incredibly offensive to women and lacking any real moral authority.

I’m not alone here either as it seems people tend to recognize disparagement when they see it (i.e. like thinking grown women are dumb enough to buy that “throwing up” is a good self-defense tactic).   Valinda Rowe, a spokesperson for IllinoisCarry.com, responded to the Illinois State Police article with the statement, “I find that [article] demeaning and disgusting.” She went on to say that she believes part of the problem stems from the governor’s desk.

According to her, Governor Pat Quinn has guaranteed that he will veto any and all legislation regarding concealed carry that reaches his desk.  Speaking out about the governor’s apparent intransigence on the matter of concealed carry, U.S. Representative Adam Kinzinger stated recently that, “those who protect your freedom, reward them, those who don’t, kick them out of office.”

But I think what disturbs me the most is that to my thinking the state police are handing out bad advice to women about an issue that is just too powerful and too important to allow any room for bum counsel.

As a society we hold the act of rape to be one of the most severe (and depending on who you are perhaps even the most severe) violations one human being can perpetrate against another, with the crime usually carrying the maximum penalty of life imprisonment akin to murder.  We punish rape this way because sexual assault can have a lifelong impact on the victim, leading to depression, a higher risk of substance abuse and an overall loss of quality of life. The point is rape is something that we’ve determined as a species not to mention in society, that must be prevented at all costs because it is one of those sins that cannot be undone and it should come as no surprise that in the past this transgression often triggered capital punishment (and still does in many countries).

In kind women actively seek out information on how to defend themselves from such attacks from trusted sources like the police and when the State Troopers doll out advice, knowing darn well better alternatives like concealed carry exist, they are letting down the citizenry they have sworn to protect.  It is almost like a lie of omission.

A police officer may respond to my points here that, because of existing legislation, troopers are required to enforce the law and so their hands are tied when it comes to recommending weapons; to them I respond irresponsible is irresponsible not what laws are on the books.   As a retired law enforcement officer myself, it’s just downright embarrassing to think that the state police would post such nonsense.

My solution to women’s defense against sexual assault is simple: allow women to carry concealed firearms in the state of Illinois right now.  Give them one chance to trade in their rat tail combs, keys, pens and pencils for a brand new Sig Sauer and I would bet the farm you would soon see an exponential drop in one particular crime category: rape.