Thanks to the Internet, we have all now seen pictures of handgun or rifle explosions; barrels peeled back like a banana or guns missing the top half of a cylinder, top straps sent all the way to the stratosphere like Trident missiles. As educational tools, photos like these have put a healthy scare into many shooters about the importance of gun safety, which is a good thing, but I also think they’ve done this job a little too well and needlessly scared a lot of would-be handloaders away from reloading their own ammunition out of fear that the same fate will befall their firearms (or themselves). Not so says I.

Handloading is something you do have to pay attention to when you are doing it, however as long as you are safe about it, like any other activity, and if you follow a few rules, then you will be just fine.

My one golden rule? Never shoot anyone else’s reloads.

Often I will be given some ammunition that someone else reloaded and, while the data is written right on the box, I always pull the bullets and dump out the powder.  It’s not that I’m being rude or snobby, it’s just a general safety rule I follow and I follow it for two reasons. One, so I don’t confuse them with my other ammunition and accidently shoot them through one of my treasured pistols, and two, I want to see how if they were loaded correctly. 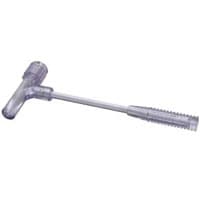 I once was given twenty or so .41 Magnum rounds. Being a somewhat expensive round to buy and reload, I was almost tempted just to shoot them instead of sticking to my reloading rule and dumping them out.  It would have been a huge mistake.

The .41 handloads had been loaded with Unique powder. The box called for eight grains. I dumped out one bullet and discovered the entire case was full of Unique.  It was so full in fact the powder was pressed around the bullet, crammed up near the crimp. I am not sure how much powder was in that case but it was way more than eight grains and more than enough to turn my Ruger Blackhawk in .41 magnum inside out.

There has been only one person in my entire reloading career that I have ever allowed to reload for me and that only came from years of trust and experience together (and the fact that he employed many of the same rules I myself use now).  Just remember before you decided to chamber another shooter’s handloading handiwork, a $30 kinetic bullet puller is fairly cheap compared to the cost of replacing a handgun or rifle.

When it comes to handloaded cartridges causing handgun explosions, the two biggest culprits are double charging and under charging the case.  Overcharging a reload can cause a ka-boom while an undercharge could lead to a squib, where the primer’s detonation does not kick the bullet out of the end of the barrel (particularly hazardous in semi-automatic pistols).

I have a very simple and nearly foolproof system that takes any guesswork out of loading my ammunition.  All it takes is a single stage press and a good RCBS digital scale.  Here is how I do it:

1.Weigh all your empty primed cases and record these weights before you load any cases.
2.Weigh the bullets and record weight.
3. Adding the powder
4. Seating the bullet
5.Weigh the loaded round.

Having this component weight data recorded will tell me without a doubt if the round has been over or under charged when I weigh the finished product. While I still visually inspect the charged cases before I seat the bullets, weighing them gives me that extra peace of mind and is also a way for anybody to check to see if my charges are weighed correctly.  I also never load more than fifty rounds at a time, ever, which I think is extremely important.

A Hobby, not a Cottage Industry 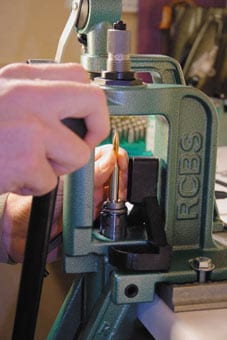 Because one of the most dangerous pitfalls I have seen handloaders fall into (especially those new to the hobby) is the thinking that they need the biggest and fastest progressive press on the market to handload effectively (or be taken seriously by other reloaders). Before they’ve even crimped a cartridge, they’ve got some chattering and chucking contraption before them, turning out rounds like a high capacity Pez dispenser (and much faster than anyone could effectively visibly inspect them). The more they turn out the less likely they will catch a bad round before it ends up in their gun (and the more likely disastrous results will follow).

Handloading is not some mystical art where you need to have a priest give you the last rites over before you start, but you do need to take a few basic precautions. If you follow them and show some common sense then you will be fine, as will your guns. Everyone has to start off as an apprentice in this dark art but with practice and experience you too can become a handloading Jedi.