Olympic Arms is one of the leading innovators in the world of AR.  Things like flattop receivers, pistol-caliber carbines and free-floating barrels are Olympic inventions.  And their latest rifle is a lightweight but powerful hunter chambered in .22-250.

The .22-250 Remington is favored by small- and medium-game hunters; it can push a .224-caliber bullet at a screaming 4,000 feet per second, and now it can do so from the AR platform. 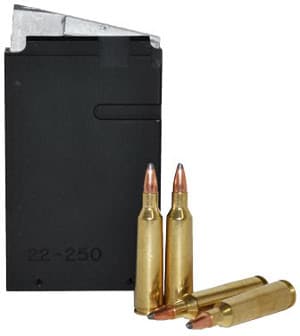 Called the Olympic Arms Ultimate Magnum AR, or UMAR, some changes had to be made to the basic Armalite rifle design to make it work with the longer cartridges.  The magazine well required lengthening, and custom magazines built.  But fundamentally the rifle functions the same.  The changes to the receiver are almost not noticeable in pictures.

Other changes were made to accurize the platform.  As you may have expected, the UMAR uses a free-floated barrel and handguard.  The 24-inch bull barrel is composed of stainless steel in the raw; it is match-grade.  It’s rifled with a 1:14 twist specifically for 55-grain bullets.  The receivers are 7075 T6 aluminum, and despite the changes to the lower receiver, it is still capable of operating with a standard AR upper and upper-appropriate magazines.

Olympic Arms’ newest UMAR in .22-250 may look tactical with its rails and combat stocks, but at heart its just a hunting rifle.  And for such a premium piece of kit, it’s not priced insanely high.  The UMAR’s MSRP is $1,430, well below what we were expecting.

.22-250 not for you?  Good news, as there are other UMARs chambered in .223 Winchester Super Short Magnum (WSSM), .243 WSSM, .25 WSSM and .300 Olympic Super Short Magnum (OSSM).  They are priced the same and all come with one caliber-specific five-round magazine.