The saga continues in the Land of Lincoln.  Last Wednesday, a House committee passed a bill that would institute a statewide handgun registry, a measure that has the full backing of Chicago Mayor Rahm Emanuel.

Democrats pushed House Bill 5831, which is sponsored by Rep. Will Davis (D-Hazel Crest), through the House Executive Committee on a 7-4 party-line vote, the Chicago Tribune reported.  The bill will now move to the full House for consideration.

To make the bill more amenable to fellow lawmakers, Rep. Davis told the Tribune that he plans to lower the proposed registration fee per gun from the current level of $65 to $20.  With the fee lowered, Rep. Davis is optimistic about the bill’s chances of passing the House this spring. 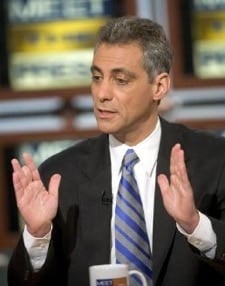 “Handgun registration laws provide the cornerstone of responsible gun policy,” Davis told the State Journal-Register. “It provides law enforcement with essential information about crime guns, reduces illegal firearms transfers and creates a fair system of accountability for gun owners. … This is not about restricting the rights of law-abiding gun owners.”

At a press conference last month, Mayor Emanuel echoed those sentiments but added that the city of Chicago suffers for lax gun laws elsewhere in the state.

“We have a gaping hole in our crime fighting strategy in Chicago and we need to close that hole,” said Mayor Emanuel.  “A lot of guns come into Chicago that are not purchased in Chicago,” he said adding, “Our laws here in Chicago are only as good as our state laws.”

But many see through the Mayor’s rhetoric and contend that the measure serves two purposes (a) raise revenue and (b) make it difficult for law-abiding citizens to own/purchase firearms.

Currently, Illinois has 1.4 million FOID (firearm owner’s identification)-carrying gun owners (As Guns.com has reported, this number is up from previous years).

If each FOID holder registered just one handgun, that state would stand to raise an estimated $91 million under the proposal.

If H.B. 5831 is enacted, Illinoisans who fail to register their handguns would face felony chargers.  Moreover, the registration fee isn’t a one-time payment; rather it expires after five years, at which point a $25 renewal fee would be due.

The House Executive Committee also reviewed and approved a separate bill (House Bill 5167) that would put a two percent “sin tax” on ammunition.  The revenue generated from this measure would go toward supporting a yet to be established trauma facility serving gunshot victims (High Crime Trauma Center Grant Fund), according to the bill’s sponsor Rep. Kelly Cassidy (D-Chicago).

In response to this bill, Richard Pearson, executive director of the Illinois State Rifle Association said in a press release, “the lawful firearm owners of this state are under no obligation to pay medical bills racked up by gang bangers, druggies and other violent criminals.”

“The assumption behind HB5167 is that somehow the state’s hunters and sportsmen are to blame for violent crime and, therefore, should be forced to pony up and pay for others’ misdeeds. Sorry, that just isn’t going to fly,” Pearson added.

Will these bills pass through the state House?  At this point, it’s still too early to tell.  But as always, we’ll continue to keep you updated.