Burris would like to introduce the new FastFire III.  It, like the other FastFire battery-powered red dot sights, is a compact design that can be mounted on just about any firearm.  It’s rugged enough for shotguns and high-powered rifles and small enough for pistols. 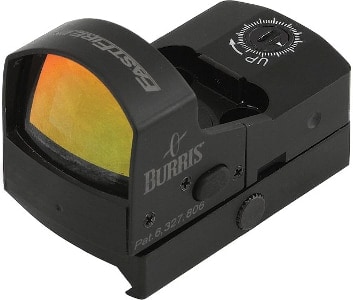 It shares a handful of similarities with the FastFires I and II, not limited to its durability and size.  It’s the same form factor, and a quick look at it might not give away the fact that this is an updated and improved FastFire.  It uses the same mounting system which does come with an optional Picatinny/Weaver rail adapter.  It also works with Burris’ Picatinny Protector mount, which mounts the FastFire III to rails but also has a pair of flanges that flank the sides of the sight and extend past it, to give it just a better survivability rate through more serious hits.

It has the same scratch-resistant objective lens and it comes in two models, one with a small dot and one with a large dot.  The large dot is 8 MOA, the small dot 3, down from 4.  The other subtle changes include a new windage and elevation system, which allow for finer adjustments and without tools.  The battery cover has been moved to the top, so the FastFire III doesn’t have to be removed to replace the power source.  It also has a low battery warning. The FastFire III has three manual and one automatic brightness settings, and should be in stores shortly.  Both models will be available with and without Picatinny mounting hardware, with a suggested MSRP of $240 and $250, respectively.

If you’re not really swayed by these new features you should be happy to know that the price on the FastFire II is now $200, or $210 with a mount.  Either way, though, if you’re a hunter, a plinker, a competition shooter, or something more tactically-minded, these small optics make target acquisition with any gun a breeze.