Way back in 1970, Elton John released a uniquely American classic, Tumbleweed Connection—perhaps the most unusual of the Brit-pop icon’s albums.  The fourth song on the first side of the album features the line, “From this day on, I own my father’s gun”.

It would make a good soundtrack for this piece about my own father’s gun, a .38 Special, that he passed down to me (and one that I own to this day).

In 1970, I was negative three years old.  My father was out of the Air Force and working as an auditor in First Atlanta Bank.  He was not listening to Elton John.  Cash, Nelson, Jennings, Lynn—that was his music.  He worked long hours downtown—coming and going at times when the city streets were almost abandoned.  Like many cautious men of his generation, he often carried a revolver tucked in the waistband of his suit pants.  His gun of choice? The Iver Johnson Cadet, a five shot .38 snub-nosed belly-gun.

The story of Iver Johnson and his forays into arms making (which began around the latter half of the 19th century and continued up until the late 20th centuries) stand a bit askew of those tales surrounding the larger gun tycoons of his day like Samuel Colt and Oliver Winchester, though his success was just as unlikely and hard won.

A Norwegian immigrant to the United States, Johnson trained as a gunsmith in Oslo but also earned a living as a freelance inventor, eventually branching out into the bicycle then small motor and motorcycle trades successfully and producing impacting designs that still fetch high prices on the collectors market.  When he arrived in Worchester, Massachusetts, in 1863 though, he found his talents as a gunsmith were in higher demand as the American Civil War was beginning to reach fever pitch.

Throughout the war, Johnson continued to accrue capital working in the North and by the 1870s, he had saved enough money to form a partnership with the little known gun maker Martin Bye.  The two created the Johnson Bye & Company and it was during this period that Johnson first identified the potential revenue opportunities in inexpensive personal defense revolvers for civilians.

When the company changed names in 1891 to the Iver Johnson’s Arms & Cycle Works, Johnson brought this knowledge with him and imparted it to his sons who continued to deal in cheap, everyman pocket revolvers up on through the 1970s.  In 1993, the company stopped making products under its own name yet groups like Iver Johnson Arms, Inc have popped up since then with unclear connections to the original firm. 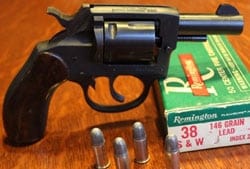 Iver Johnson Cadets are all break-top revolvers with pin cylinder release, fluted hard chrome lined barrels and a five-shot capacity.  Upon opening, all rounds eject and the gun weighs about 24 ounces unloaded.  On the collectors market today (.38 S&W is harder to find than it was so few today turn to these guns as self-defense weapons) examples in good condition can fetch between $100-$160.

An Iver Johnson Cadet in .22 caliber was notably used to shoot and kill Presidential candidate United States Sen. Robert F. Kennedy in Los Angeles, California on June 5, 1968, and an earlier model in .32 was used in an assassination attempt against President Mckinley in 1901.

Memories of Dad (and his Gun)

My father never had occasion to use his Cadet and it’s a damned good thing—he was a terrible shot.  When I was in my teens, he would sit on the porch of my grandmother’s old farmhouse and miss shoot at tin pie plates that we had staked out in her front yard.

Granted, the Cadet is a short-barreled gun.  It is most effective at pointblank range and the pie plates may have been 25 or 30 feet away. Still, we had a hell of a time with those pie plates, and if we hit one at all, we were elated.

My mother was a different story entirely—when she had a gun in her hand, watch out.  Every time my father and I went shooting, she’d eventually show up.  She’d load five rounds in the Cadet, cock the hammer, and drill a hole in the tin.  And then four more.  She didn’t derive the same joy from killing pie plates, but she loved making us look like amateurs.

My grandmother, who lived alone in the wilds of western Alabama for more than 30 years before she died, could shoot, too.  But she was partial to her scattergun, which she kept loaded with rock salt.  But that’s another story.

The Secret Life of Guns 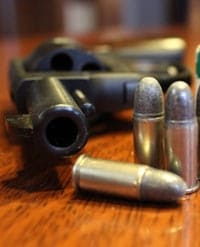 My father died in 2010 after a 14-year battle with Polycythemia Vera—a bone marrow disorder that results in an overproduction of red blood cells.

When we sorted out his estate, I inherited his guns.  There was an old Unique .22 LR auto, and a German .22 LR revolver.  I have no idea where these came from—I had never seen them before.  Some of the guns I knew that he had were missing too and there are two Colt 1908 Vest Pocket .25 ACPs and an old .38 Colt revolver that are still unaccounted for.

And that’s what’s eating me—not losing these guns, exactly, but losing the stories attached to them.  I know the story behind the Cadet—my father, mother and I all shot it together often—but I’m clueless about the rest of his guns.  There’s too much that I want to know that I’ll likely now never know, most important of being if these other guns meant anything to him, or not—and also if he sold, socked-away, or traded the missing Colts (which I did find out were family heirlooms).

When my dad died, I inherited some greasy socket wrenches and a cold blue piece of American steel.  My son will have more.  I’ve started a journal that details where all of my junk came from, what it means to me, and why.  The journal begins with this entry—the Iver Johnson Cadet.   And I’d suggest you do the same.  As fond as I am of saying that guns are just tools, they are sometimes much more.  Sometimes, they are all you have left.