It’s been tried a few times in the past but it has never really succeeded—a polymer-framed 1911.

While polymer frames and furniture are widely accepted, having been in use for many decades by many companies, John Browning’s 1911 has largely been immune to polymer changes.  Rock River Arms hopes to change that.

There have been a few companies to construct hybrid 1911 frames before, like STI which still does with their competition-minded 2011 frames.  There’s SVI and BUL as well, along with Wilson Combat.

But all of these guns have one thing in common.  They’re all high-speed low-drag race frames.  They’re designed around competition and the guns that use them are none too cheap. 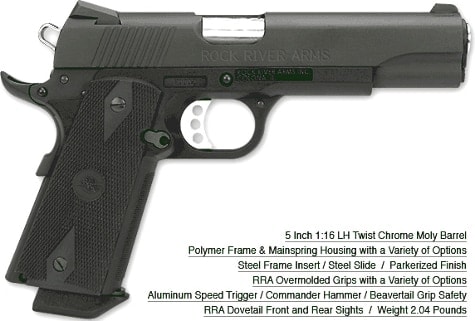 It does have low-mount Novak-style sights which we believe are a wise improvement over G.I. sights any day of the week.  Other than that, aside from the materials used, it doesn’t stray from the pack.  Skeletonized medium trigger and Commander hammer, beavertail grip safety, rear-only angled slide serrations and a lowered and flared ejection port are the extent of the features.

The 1911 Poly even uses a standard, not full-length, guide rod.

Nope, the interesting stuff is the frame itself.  It’s a two-piece design where the polymer grip and dust cover portion of the frame slide up around a single solid steel insert.  The stress parts of the grip are metal, the plastic is just there to reduce weight and recoil.  The Rock River Arms 1911 Poly even uses standard grip panels (included ones are plastic, naturally). 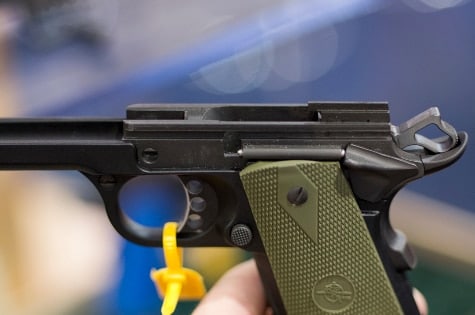 The finished product is a 1911 with a dry weight of 2.04 pounds with a matte parkerized finish.  The grips will be available in a variety of colors, so far we’ve only seen black frames, but Rock River Armory’s website has some pictures of olive drab and desert tan frames as well.

The MSRP hasn’t been fixed yet, but they’re expecting it to be about $800, which is good and means the real-world prices will be closer to $600, making it very competitive.

All that being said, there are still a couple of ways to look at this: first, naturally, is as an abomination.  Johnny B. would have invented fiberglass-reinforced polymer if he thought the frame of a 1911 should have been anything other than metal.

Or we can think of it as a slight tweak, as it really is slight, to the 1911 design we’ve come to love. 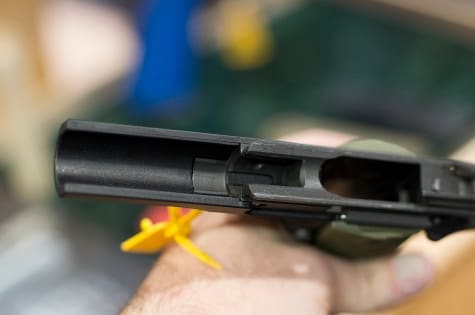 One thing that’s surprising is that even though the frame is mostly polymer, it’s still heavier than some of the alloy-framed 1911s out there.  That makes us wonder just how much steel is in the frame.  That being said, at two pounds, it’s lighter than any all-steel 1911 by about a fourth, and while some alloy-framed 1911s may actually weigh a little less, they certainly aren’t in the same price bracket.

We think that an inexpensive polymer-framed 1911 will be more popular than some would bet, and that it will definitely be a gateway 1911 for anyone who’s set in their tactical tupperware ways.