Virginia One-Handgun-A-Month Law: Was it Effective?

Last month, Virginia Governor Bob McDonnell signed a bill that repealed Virginia’s prohibition on purchasing more than one handgun in a 30-day period.  The ‘one-handgun-a-month’ law had been in effect for roughly 20 years and was designed to cut down on gun trafficking in Old Dominion.

An article published by a local Virginia television station, CBS-6 News, put together a video that raised some questions concerning the efficacy of the prohibition, in a sense, asking “was it effective” and “should lawmakers have considered its effectiveness before repealing it” (see video below).

If you’re an impatient reader, I’ll answer those questions directly right now.  Was the one-handgun-a-month law effective?  No, based on the available data.  And should lawmakers have done a more thorough job researching the efficacy of the law before repealing it?  No, not really.  By and large, gun control laws that primarily impact law-abiding gun owners do little to stop criminal behavior.

Now, if you’re a curious reader, you can see how I arrived at those conclusions below.

What People Are Saying About the Repeal Bill

Proponents for repealing the ‘one-handgun-a-month’ law argued that technology had rendered it antiquated.

“I think Virginians deserve effective laws, and one handgun a month has been overtaken by technology and improved background checks,” sponsor of the repeal bill, Del. Scott Lingamfelter (R-Prince William) told the Associated Press. “Criminals don’t go into gun stores, stand there in the bright light, hand over their driver’s license and stand there and wait for the vendor to see if they have a criminal record.”

He added: “If you really want to get after gun crime, you get after people who use guns illegally. You don’t punish law-abiding citizens.” 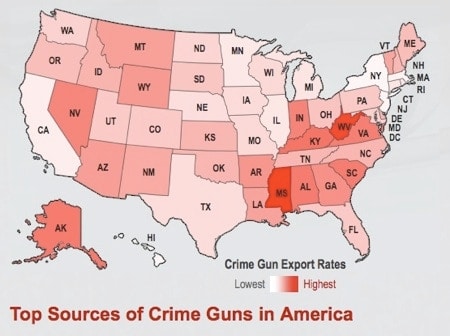 Meanwhile, opponents of the repeal bill contended that it would have tragic consequences.

Andrew Goddard, the president of the Virginia Center for Public Safety, told the AP, “They have not learned a damn thing,” alluding to the school shooting in Ohio that left three students dead.

“Here we are watching kids dying in other states, and we’re going to be a purveyor of firearms for other states,” Goddard, whose own son Colin was wounded in the Virginia Tech Shooting, added.

“In the last two months alone we have had two police officers shot with illegal guns that came from Virginia,” he told CBS-6.

Repealing the law “is only going to make matters worse,” Bloomberg said.

The Relationship Between New York and Virginia

According to statistics collected by the Bureau of Alcohol, Tobacco, Firearms, and Explosives (and published on Tracetheguns.org), the state of Virginia had the 7th highest rate of crime gun exports in 2009, with a total of 2557- of those, 443 ended up in New York State.

As it turns out, Virginia has been the biggest exporter of crime guns to New York for at least the past five years, maybe longer (the statistics available on the ATF’s website are limited).

What caused the decline?  Could it be that the one handgun a month limit was working? 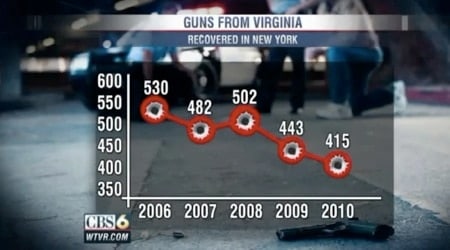 No, because it was in effect for the entire five-year period (it was signed into law in 1993), which suggests that other factors had to contribute to the fluctuation over the last five years.

Looking at the broader picture, in 1991, before the purchase limit was implemented, ATF records show that 40 percent of the 1,236 guns found at crime scenes in New York had been purchased in Virginia– that is roughly 494 firearms.

Now, while many pro-gun control advocates will say that the percentage has dropped from 40% in 1991 to 17% in 2009, the reality is the number of guns imported has remained relatively constant – around 500 guns per year.

What’s clear in looking at these numbers is that the implementation of the one handgun per month purchase limit had little, if any effect, on the number of guns flowing from Virginia into New York.

The demand for illegal guns in New York is high.  But is it so high that it’s creating widespread interstate gun trafficking?

After all, this was the impetus of the one-handgun-per-month law, to prevent interstate gun trafficking.

“Virginia’s response with one-gun-a-month was to really address a multi-state concern,” Dana Schrad, director of the Virginia Association of Chiefs of police, told CBS-6 News.

The concern “was the ability, the ease of being able to purchase guns in Virginia through a straw man,” Schrad added.

But straw buyers are not the problem, at least according to Gary Kleck, professor of criminology and criminal justice at Florida State University, who spoke about Florida’s gun exporting issues.  His comments about gun trafficking also ring true with respect to Virginia. 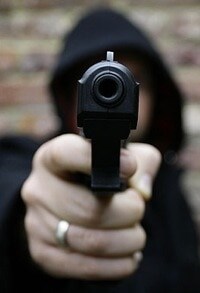 He said, in an article published by the Sun-Sentinel that, “large-scale, interstate gun trafficking is rare, and often overblown by politicians who want to blame crime on outside factors. Rarely do criminals travel to Florida because they think it’s easier to buy guns down South.”

“This is not about gun trafficking. It’s interstate migration,” Kleck added, who has interviewed convicted felons and studied the movement of crime guns across state lines.

“The most common scenario is when someone buys a gun legally in Florida, moves out of state and has his or her weapon stolen in a home burglary. Or a burglar in Florida steals a homeowner’s guns and sells it to someone in another state,” Kleck said.

“The chances of a burglar coming across a gun here is that much greater than in other states,” he concluded.

If gun theft and interstate migration are the primary cause of the export of firearms from one state to the next, it would make sense that a (flawed) gun control measure designed to target straw buyers would have little effect on the number of exported guns.  That is because straw buyers are not the problem, burglars and gun thieves are the problem.

The reality is that instead of passing gun laws that put limits on law-abiding gun owners, Virginia should have considered upping punitive consequences for those who seek to steal firearms.