Long Gun to Handgun Transitions (on the Move) (VIDEO)

Your carry handgun is your last chance to stay in the gunfight once your rifle goes click, so transitioning from a shoulder mounted long gun (or submachine gun) to a sidearm is an important combat skill to learn and practice.  In this piece I’ll cover when to transition, how to transition, which weapon system to load first and why, and finally, why to practice on the move once you’ve gotten the hang of doing it static.

The reasoning behind why you would transition to your sidearm versus other action really depends on distance or, to better clarify, the distance between you and the threat.  For example, if you’re farther away from the threat, say about over 50 yards, transitioning from your AR-15 to your HK45c (and its short sight radius) would be impractical because you would likely not be able to effectively engage the target with this pistol at this extended distance and should not shoot while actually moving. 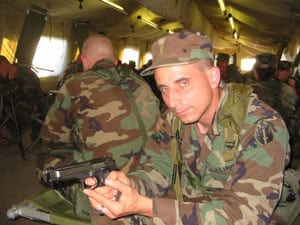 On the other side of the coin, you shouldn’t waste time transitioning to your sidearm in extreme CQB environments. Transitioning takes time and can put you at a disadvantage in the heat of a fight, exposing you to attack as you reach for your weapon.  If an enemy is upon you and you’re still holding your primary weapon system, it’s a better strategy to use it as an improvised weapon to defeat your opponent (perhaps with a bayonet attachment or as a club).  This is why they call it your primary weapon system and, as with all things combat, these close quarters fighting skills need practicing.

Rather, when considering if you should transition to your concealed carry gun or not, you follow these two rules:

1.Only transition from your long gun or your primary weapon system if you’re out of ammo or if you have a malfunction.
2.Only transition at a distance of approximately 25-yards.

Accordingly you should practice long gun reloads and malfunction drills at distances greater than 25-yards, while practicing transition drills at around 25-yards.

How do you do a transition?

The good news is that once you know when to transition, actually going from a rifle to a pistol is easy if you’ve got the right tactical rig. It’s one of those skills that will only become more refined with practice, rather than one that you need to work on to acquire.  The bad (or at least lukewarm) news is one, you have to retain possession of your primary weapon, so no tossing the gun Hollywood style, and two, this means a lot of transitioning effectively, especially with a sling means just not hurting yourself.

1. Cant your weapon by turning it slightly towards your support hand.
2. Use your support hand to lower (not drop) the rifle down so it dangles, muzzle down, between your legs.  When the bullets are flying, you definitely don’t want to take a WAP! to the knee with the gun barrel, or a SLAP! to the groin with a 30-round magazine.
3.Use your dominant hand to reach for your handgun (eventually, you should be doing this while lowering your primary weapon).
4.Bring your support hand to your pistol to aim and shoot.  Remember, wearing a sling is ideal since a two-handed grip on your pistol offers much better control while the rifle can just hang there. 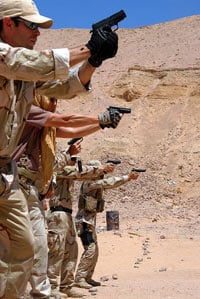 Be aware that you need to train with what you carry and carry what you train with and both of these techniques will have to be adapted if you do not carry a belt holster (i.e. you use a drop leg holster or a tactical vest mounted holster).  Regardless, the theory is the same: move the rifle out the way and draw your sidearm.

What about transitions on the move?

A good litmus test for the any specific tactic you’re considering a place for in your tactical toolbox is to ask yourself this: Can you do it well on the move, in low-light or the dark and under stress (like rounds flying at your head)?

Transitioning on the move is simple enough, but you still have to hold fast to the tenets of combat movement or shooting on the move.  Probably the most important aspects of this to remember about this though are:

1.Shoot with both feet on the ground
2.Rely on your sight and smooth trigger pull to fire the gun actually
3.Never shoot while running

The ability to perform transitions while remaining a moving target is a clutch skill set and after several static transition drills, it’s essential that you up the ante and try the techniques on the move, in low-light and with simulated stress (e.g. timed, competition, where embarrassment of failure could be a factor, etc).

What weapon system do I load first, primary or sidearm?

Always, always, always load your secondary weapon first. You don’t want to transition to your handgun only to find that it’s empty.  Also, you should follow this rule to the letter even when you think it can be skipped over or is trivial.

By way of illustration, in the event that you do transition from your rifle to your handgun and you end up shooting all the rounds loaded in your secondary weapon, make sure you load this handgun again first, before reloading or fixing the malfunction on your primary weapon.

Why? Again, because you don’t want to be in a firefight without enough ammo loaded in your secondary weapon just in case you need to transition.  This is your last line of ballistic defense so it should be the one you consider first. 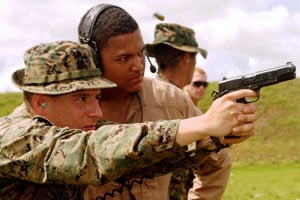 Complications can arise however for left handed shooters who shoot pistols with their right hand (as detailed in the video) stemming from the phenomenon of sympathetic reflex—unconsciously mirroring the actions of one hand with the other.   For example, pulling the trigger with your dominant hand or moving your rifle about with your off-hand could cause a negligent discharge through sympathetic reflex if your hand in also on the trigger of your rifle (and it is not really out of ammo) or your sidearm is not aimed at the target.

I highly suggest that you keep your guns on safe when practicing transitions, especially when you first start out or just don’t even load your long gun at all.  Remember, you’re not really practicing shooting really, you’re practicing the transition.  Concentrate on the movement from long gun to sidearm, get it down pat then, once you feel comfortable (or once you’re in a credible training course with credible instructors), go to live fire. Better safe than sorry, especially while you’re working out the bugs of a new technique.

Even when you start practicing with live ammo, I suggest you only load a couple of rounds in your primary weapon, say 10-rounds in a 30-round magazine.  You can also load one or two dummy rounds before you load your ten live rounds to signify an empty weapon/weapon malfunction (the bolt will remain closed), which would trigger a weapon transition.

Watch your knees, protect your groin and beware of your muzzle discipline. Stay on target, stay on line (if you’re shooting with several others), stay safe and have fun.

Of course, remember that firearms are inherently dangerous. Stay safe and get professional training.  Until next time, continue to hone your skills and keep adding to your tactical toolbox.