The Winchester Model 1892 is one of the most iconic lever-action rifles.  Designed by John Browning the Model 1892 was just what Winchester wanted as a lightweight alternative to the Model 1886 chambered for black powder pistol cartridges of the day.

And even though the Model 1894 was more popular, eventually selling over seven million rifles in its more than one hundred years of production, the Model 1892 had one advantage.  It was friends with John Wayne.

The Duke carried several Model 1892s in a bunch of his movies, and he leaned towards the large loop. 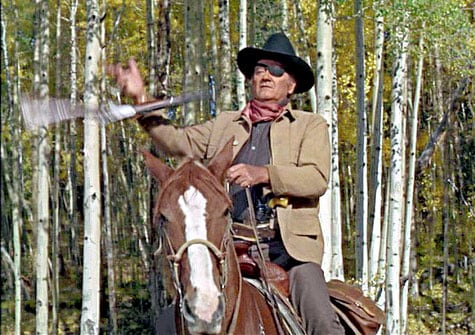 Large loops may look oversized and inelegant, but the truth is that they make fast cycling of a lever-action firearm much more fluidly, and they are also a lot nicer to your hand bones.  Working a standard lever slowly you might never notice the advantages, but when you really tear into a magazine, knocking that lever back and forth fast is rough on the knuckles.  The large loop is also much more glove-friendly.  Ultimately the large loop is the superior lever for one reason: one-handed operation.  If you can cycle a lever gun one-handed your brass content automatically goes up five percent.

It is somewhat true to the archetypal dimensions and design, with a tang-mounted safety and 20-inch recess-crowned button-rifled round barrel.  It has an adjustable rear sight and Marble Arms front brass bead, and ten-shot full-length magazine.  The furniture is walnut with a satin finish and the straight buttstock has a steel buttplate for protection.  All of the steel has a deep blue finish that should last a very, very long time.

The Large Loop Carbine is a limited-edition run, although Winchester is thankfully not going bonkers with the MSRP.  While it’s not cheap by any stretch of the imagination, the Model 1892 Large Loop Carbine has a suggested price of $1260, which is actually less than many of Winchesters other lever-action rifles.  We expect the real-world price to be $1000 or less.

This Model 1892 is an instant classic, an out-of-the-box heirloom.  It’s a working treasure.  That being said, there are other non-Winchester options in the large loop arena.  Is it worth the extra money for the Winchester name to you?