Yesterday, the California Supreme Court clarified a long-standing law that makes it a crime to shoot at an occupied vehicle or building.  The court expanded the law to include shooters who have breached the plane of a home or vehicle with the gun, but remain outside the vehicle or structure.

In other words, if a man stood outside your home, but stuck his hand through an open window and shot at you, under the old law, it was unclear whether he was shooting “at” your home or shooting from “within” your home.  The law now qualifies that scenario as “at” the home.

The distinction is critical because in California it is illegal to fire a gun in public, except when one is hunting or acting in self-defense.  Moreover, the law makes it an alternative felony-misdemeanor for any person to maliciously and willfully discharge a firearm “at” an inhabited dwelling house, occupied building, occupied motor vehicle, occupied aircraft, inhabited camper, etc., punishable up to three years in prison.

The case that raised the issue involved a San Diego County man, Martin Manzo, who shot and killed Jose Valadez, a passenger in Manzo’s truck.  Manzo’s lawyer argued that because the gun had crossed the threshold of the truck at the time of the shooting, the gun was not “discharged ‘at’ the vehicle” but was instead discharged “within” the vehicle.

A state appeals court actually agreed with Manzo’s lawyer, on the grounds that the law was vague and cited a legal principle that ambiguous criminal laws must be interpreted in favor of the defendant (the rule of lenity). 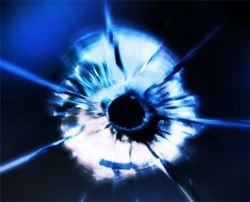 So, Manzo’s conviction for shooting at an occupied vehicle was reversed.  However, he was sentenced to 150 years to life, plus a consecutive five-year determinate term for his drug-related and murder convictions (according to prosecutors Manzo was trying to steal methamphetamine that was hidden in his victim’s cell phone).

Due to the ambiguity of the law, the state Supreme Court heard the case and overturned the appeals court ruling.  It had no bearing on Manzo’s plight.

“Lawmakers had made it clear that they were concerned about the dangers of firing into a house or car, where the confined quarters increase the possibility of injury,” said Justice Marvin Baxter in the unanimous ruling.

Those dangers are “in no way diminished if the shooter is so close that the gun breaches the plane of the home or vehicle,” Baxter said.

However, Manzo’s attorney, Arthur Martin argued that the ruling had just muddied the water even more.

“If a person has one foot outside the car and a knee on the seat, is it shooting at an occupied vehicle?” he told the San Francisco Chronicle. “It’s not a clear line.”