Starting in 2003 the U.S. Army started the Future Combat Systems (FCS) program, which was intended to modernize the Army brigade by brigade, replacing as much as possible with 21st century technology.  The FCS program is the birthplace of the unmanned aerial vehicle and many other successful and not-so successful innovations.

The FCS program was geared towards global conventional warfare technologies, i.e. World War III.  By 2009 the realities of modern combat, counter-terrorism, would come crashing down on the FCS program.  It was cancelled roughly one-third of the way through its near 30-year plan. 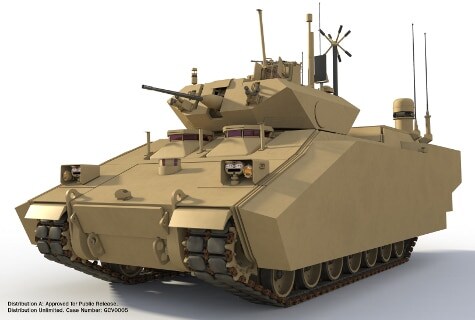 Still, some of the technologies had and still have potential.  The drone networks have proven invaluable as far as intelligence and support fire, and there are many other places where 21st century tech can come in handy.  So while the FCS program was cancelled, parts of it were rolled into the Brigade Combat Team Modernization (BCT Modernization) program.  And in BCT Modernization, the Ground Combat Vehicle (GCV) program lives on.

And the GCV program means hybrids.

Simply put, the Army spends too much on energy.  Just unimaginable resources.  The average amount of fuel consumed per soldier in Afghanistan is 22 gallons per day, and the cost of fuel in Afghanistan, including transportation, can be as high as $400 per gallon.  Or to put things into another context, the Department of Defense (DoD) spends more on air conditioning than NASA has in its entire budget.

So the GCV program intends to replace as many of the Heavy and Stryker brigade combat team vehicles with new vehicles that retain all of the same strength, at the very minimum, of their current vehicle, only with more fuel-efficient drive trains.  The Army wants to see prototypes of GVCs starting in 2015 and working units fielded by 2017. 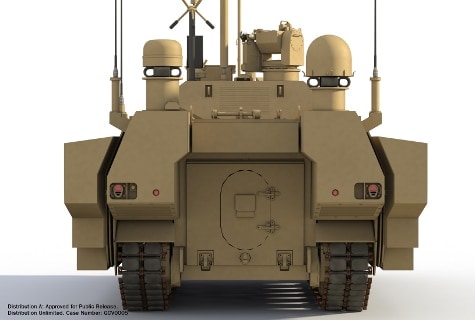 Northrop Grubman and BAE Systems have partnered together to develop the first prototype for the Army’s GCV program needs.  Their GCV is part armored infantry carrier part mobile gun and every bit of 70 tons.  It promises 20 percent better fuel efficiency and can shuttle around 12 personnel, three crew and nine squad, and they have just made public digital renderings of their prototype vehicle.

This GVC prototype is armed with a 7.62 NATO machine gun as well as a main dual-feed 25mm autocannon. That said, the GCV has a modular chassis that can accept alternate turrets for just about every mission requirement you can imagine.  It’s also heavily armored and meets and in some places exceeds the MG-33 MRAP armored infantry carrier.  And it’s got tank treads, which are pretty sweet.

The modular design of this GVC mean that the military can take one platform and rig it as a troop transport or a medivac or fire support vehicle, spotting for fire missions shot miles and miles away.  It also makes it long-lived, or that’s the intent.  Northrop Grubman and BAE Systems expect this platform to last the Army for the next three to four decades.  You can see their data sheet, more renderings and other information about the GVC prototype on their website right here.

With the DoD and the Army seeking out more and more fuel-efficient technologies, it’s clear that the combat hybrid is here to stay. The only question remains, will they have gun racks?