In the late ’90s, Heckler & Koch began working on a successor to the MP5 submachine gun.  The MP5, in production since 1966, has had more than two dozen variants and a number of non-HK clones to add to its legacy.  It is one of the most successful submachine guns ever made.  The MP7 was supposed to be the 21st century heir to the MP5’s Cold War reign.

The MP5, while widely adopted by agencies, governments, freedom fighters and rebels the world ’round, was showing its age against modern armored combatants.  Largely chambered in 9mm NATO, the submachine gun just isn’t capable of punching through body armor—armor which is becoming increasingly affordable and common, not just for friendly forces. 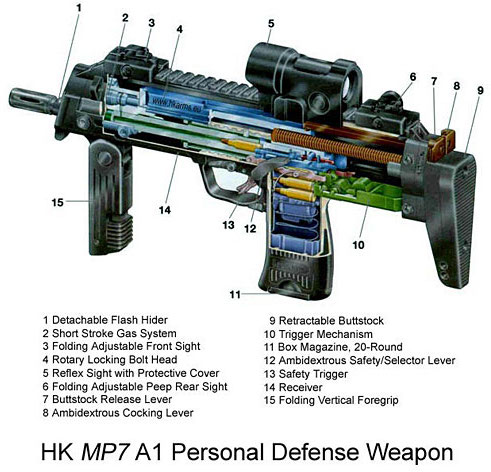 Western agencies and militaries began to look for a submachine gun capable of penetrating armor and they found one.  The Fabrique Nationale FN P90.  Chambered for the zippy little 5.7x28mm cartridge, the P90 and its derivatives have no problems making holes in common body armor.  Even the FN Five-seven can put 5.7mm holes in some body armor.

Heckler and Koch’s sub-gun business practically required them to manufacture a competing firearm.  Originally known just as the Personal Defense Weapon (PDW), their competition would eventually be named the MP7. 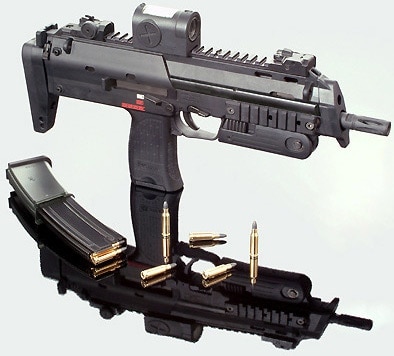 The MP7 doesn’t use the roller-delayed blowback operation of the MP5—the MP5 is a kind of scaled-down G3 rifle—it instead uses a short-stroke piston gas-operated rotating bolt, like a scaled-down G36 rifle.  And it was chambered in the then completely-new 4.6x30mm cartridge.

Similar in principle to the 5.7x28mm cartridge, the 4.6x30mm rounds are very small, high-velocity cartridges with the impeccable ability to penetrate all sorts of body armor.  They’re also long but narrow in diameter, leading to relatively high magazine capacities.  While they have about the same muzzle energy as a 9mm bullet, the smaller diameter leads to about a 33 percent increase in magazine capacity for magazines of the same length.

More is good, since the MP7 has a full-auto firing rate of 950 rounds per minute.

Like the P90, the MP7 was given a little brother in pistol form.  Heckler & Koch designed the UCP to pair with the MP7, an almost normal-looking service pistol chambered in 4.6x30mm.  Although externally similar to the HK P2000, the UCP uses a delayed-blowback recoil system.  However, it would be short-lived.  Poor ballistics led to the eventual demise of the UCP in 2009.

Some might say the same thing is in the works for the MP7.  While it’s an extremely lightweight submachine gun, at just over four pounds loaded, and extremely compact at 16 inches long, two-inches wide and still packing seven-inches of barrel, its ergonomics and simple manual of arms have not been enough to overtake the FN P90.  The answer lies in the bullet.

The 5.7x28mm cartridge itself isn’t considered to be the be-all-end-all of submachine gun chamberings.  While it is clearly effective against armor, its stopping power has been questioned by many.  And truthfully, 4.6x30mm is a step down.  It just doesn’t have the muzzle energy as the 5.7x28mm, let alone 5.56 NATO or .300 AAC Blackout—growing favorites with PDWs.

The 4.6x30mm has excellent penetration and good exterior ballistics—those little bullets are effective out to 200 meters—but the bullets are teensy, 30 grains, and not designed to expand.  Even the hollowpoints don’t mushroom very much.  The bullets are heavy at the rear, usually copper-jacketed steel, and are expected to tumble after striking their targets to inflict damage.

Now we’re not volunteering to get shot by anything, even in 4.6x30mm, and the MP7 has seen quite a bit of adoption world-wide, including the vaunted United States Naval Special Warfare Development Group (DEVGRU), a.k.a. SEAL Team Six, but it will take more than just time for the MP7 to replace the MP5.  It will take another cartridge.

Rumors persist that the MP7 will be re-chambered in 5.7x28mm.  We asked Heckler & Koch about this and didn’t get an answer.  But really, almost any other pistol cartridge will do.  The MP7 is a neat little PDW; it just needs an extra bit of oomph to push it into the mainstream.