Over the many years I’ve been following the gun world in print, point shooting has been a shooting technique I’ve seen self defense instructors both laud and condemn in equal parts.  Yet, despite all the strong opinions elicited and the large amount of ink spilled over this subject, I’m always surprised at how few shooters actually know what point shooting is let alone really practice it, which implores me to wonder aloud, as shooters, have we gotten used to newer methods of defensive shooting and forgotten the lost art of point and click?

What is Point Shooting?

Point shooting (also called threat focused shooting, incorrectly called reflexive shooting and sometimes both correctly and incorrectly associated with a flash sight picture) in its simplest form is shooting at close ranges while not being able to use your sights. This could be because of the speed of action, low-light conditions or because the scenario takes place in a confined space, but the last part—the part about not using the gun’s sights—is crucial because this is what separates point shooting from other style. 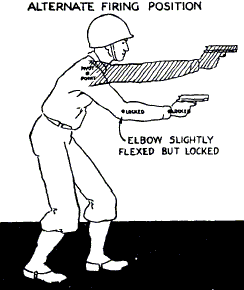 The shooter literally does not aim the gun but rather uses a combination of good pistol grip technique, trigger pull and intuition/sight picture to hit the target.  Accordingly, point shooting is not just a quick draw, though quick draws are a vital ingredient in point shooting.  The resulting action is decidedly faster than drawing and aiming and with practice can become even more effective.

Accordingly, point shooting is a close quarters combat technique, most effective against targets within the seven-yard range.

In his book No Second Place Winner, Bill Jordan likened point shooting’s draw and hold components to tossing a knife underhanded. The gun hand and gun should end up outstretched and slightly above waist level. Jordan also stated that this type of shot is best for less than seven yards.

There are no hard and fast rules to point shooting, but there are a couple of well-known doctrines and they come to us from William Fairbairn, Eric A. Sykes and Rex Applegate, three of the earliest proponents of the tactic.

Called the Fairbairn, Sykes, and Applegate, the British Office of Strategic services commissioned the development of this method defense tactic in 1942. Rex Applegate would detail the methodology fuller in his 1943 classic self-defense primer, Kill or Get Killed.

For those that advocate the two-handed style of point shooting, such as the Israeli method, it can be effective, but the one-handed stance is faster to get on target once one gets good at it. To hit targets not in front of the shooter, Applegate advises turning at the waist and not moving the arms like a tank moving on its turret. 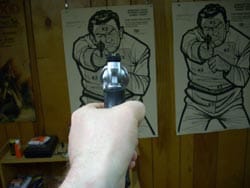 The National Rifle Association (NRA) recognizes the use of point shootings in life-threatening situations where the body’s natural reaction to close quarters threats may prevent meeting the marksmanship requirements of sight shooting and with an endorsement like that, I feel point shooting is something that all defensive shooters should know (and in this case knowing means practice).  As mentioned, point shooting hinges on instinct and instincts take time to cultivate through repetition and the best way to practice point shooting, like any other potentially dangerous tactical technique, is with an unloaded and empty handgun.

Each repetition should take less than a second.  When you feel confident about the drawing, aiming and firing techniques, you can go live ammo, just start off slower than the first round of practice.  Remember, only set up targets at about seven yards and if you are having trouble hitting this, there is no shame in moving the target forward (this is s CQC exercise).

Point shooting is becoming a lost art in some circles, most law enforcement agencies have shied away from it preferring to rely on aimed fire, which of course is necessary.  But it does not hurt to look back at a proven method of gunfighting that once was a school of thought among many of the top pistol shooters in the country. It kept many a soldier and lawman alive in the day, and it can help you too.