To celebrate its 50 years of success, Remington has rolled out a Model 700 that is both new and old.  The 50th Anniversary Edition Model 700 is everything that the first Model 700 was, just made today, in the same chambering: 7mm Remington.  This is a beauty of a bolt-action rifle.

The Remington Model 700 is one of the most successful rifles in American history.  It was brought to life in 1962 and designed from the ground up to be mass-produced, making it extremely affordable for both private and public purchasers.  As such it has since been chambered in more than two dozen calibers in over a hundred different variants, in short and long rifles in everything from .17 Remington to .458 Winchester Magnum.

Not only is the Model 700 easy to mass-produce, it’s also quite accurate.  The 700 is in service with both the US Army and Marine Corps as a sniper rifle.  The US Border Patrol uses them, too, as does the Secret Service and so do the Mounties up in Canada.

And so to honor that success, Remington is rolling out a Model 700 that perfectly represents the original.  Although it will still be built through contemporary measures, the rifle features 1960s-style checkering (meaning “Fleur-Di-Lis” checkering) on the B-grade walnut stock with a flat-bottom fore-end just like they did 50 years ago, a Remington spokesman told Guns.com at SHOT Show.

On top of that it has a few upgrades such as an improved, adjustable X-Mark Pro trigger a laser-engraved floorplate. 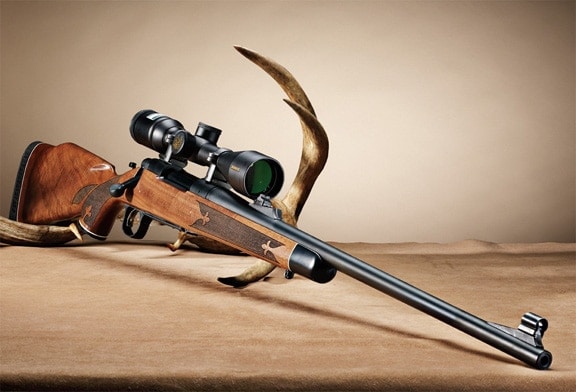 Also like the original, the 50th Anniversary Edition Model 700 has a satin blue finished 24-inch barrel, a matching satin receiver, and it is chambered in 7mm Remington Magnum, so it will have no problems tackling anything that passes into its sights.  Not only is 7mm Remington Magnum a great game rifle, it’s also a proven competition round capable of making 1,000-yard shots routine.

So we’re more than pleased that Remington is bringing back a piece of history, and we’re happy to see that while the rifle is true to form, it’s prettied up a bit extra and tuned up with a high-end trigger.  This is a limited production run, so if you really want one, you’ll have to jump. The 50th Anniversary Edition Model 700 has an MSRP of $1,400, which means you should expect to pay at least $1100 in stores.