Ruger has partnered with Crimson Trace to knock up four new variants of three of their most popular compact and concealed-carry-friendly models of handguns.  They are now offering the LC9, the LCP, and two models of LCR with factory-installed Crimson Trace lasers. 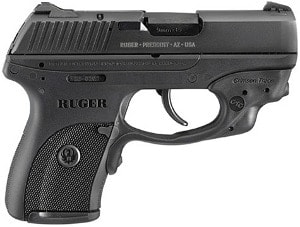 Ruger knows that people love lasers.  Sure, not everyone, but more than enough.  Particularly with smaller guns, people like lasers as a primary sighting system.  The idea that all you have to focus on is a shock of a bright red dot on your target in order to shoot effectively, no matter what the circumstances, is compelling.

And in truth, the smaller the gun, the smaller the sights.  We can’t disagree with the notion that with little pistols a laser isn’t a bad idea.  There is even a segment of the market that won’t touch a gun unless there is a laser option available to it.  And since a good number of people are going to run out and upgrade these gun with a Laserguard or Lasergrips down the line, it’s only wise for Ruger to partner with Crimson Trace and light up these guns off the bat. 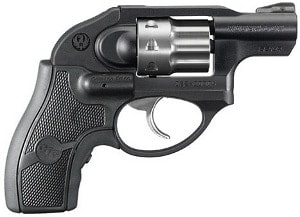 The four handguns are the LC9, the LCP and two LCRs, the .357 Magnum model as well as the LCR chambered in .22 Long Rifle.  Now we know what some of you may be thinking: a laser on a .22?  There are many reservations about using a small-caliber rimfire for self-defense—and putting a laser on a plinker is kinda silly.  Aside from the truism that a gun is better than no gun, we’re willing to say that the LCR in .22 Long Rifle has some advantages over other .22s in the self-defense department.

First up is the trigger.  The LCR has a great trigger, especially for a rimfire revolver.  Most rimfire revolvers have heavy stagey triggers that are a bear to use in double-action.  This is completely untrue for the LCR.  The trigger is smooth and sweet and not heavy at all.  It’s easy to shoot fast and accurately.  But the main reason is that it’s double-action. 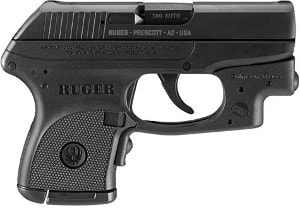 The strongest argument against .22s is that the ammo they use is less reliable than centerfire ammunition.  With a revolver that’s not nearly as important.  Just pull the trigger again and a new round will swing into place and you’re good to go.  Nothing to clear, nothing to manipulate, just a brand new bullet.

That being said, a single round of hot .357 Magnum has almost as much energy going through it as an entire 8-shot cylinder of .22 Long Rifle.  Which is also a great reason want a trainer in .22.  Even shooting soft .38s, nobody puts in long hours practicing with a small-frame revolver.  Why a laser?  To practice with a revolver as close to the full-house shooter you carry.  But if you’re going with .22 because you have recoil issues or wrist problems or anything like that, you could do a lot worse than pick up an LCR in .22 for self-defense. 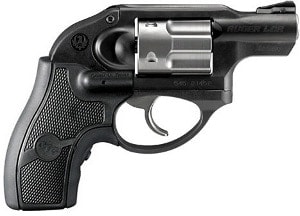 The Crimson Trace lasers on these Rugers are all activated the same way: by gripping them.  There is a small switch right where your middle finger wraps around the grip which toggles the lasers on and off.  It’s very natural.

The LCP and LC9 lasers use one 1/3N Lithium or two 357 silver oxide batteries, where the LCR grips run on a pair of 2032 batteries.  All models use 5 milliwatt lasers that have an expected runtime of about four hours.  They have polymer frames over-molded with rubber for texture and protection, and they are adjustable for windage and elevation.

Crimson Trace laser sights can run two to three hundred dollars by themselves, so you’re likely to save quite a bit of scratch if you get them bundled with the Ruger of your choice.  The MSRPs for the LC9, LCP, LCR .357 and LCR .22 are $619, $549, $869 and $792, respectively.  We expect them to be at least $100 cheaper than that in stores, likely by quite a bit more for the LCRs.