'What if' Self-defense Tales: 'should' versus 'will'

Chances are that if you’ve spent enough time at your local gun shop, you’ve found yourself listening, at one time or another, to one of those “what if” self-defense bull sessions (usually because they tend to be the “louder” conversations).

The classic set-up goes something like this: a bunch of trigger happy pistoleros swap a bunch of “real” stories that detail dramatize exactly what he or she would do if they were confronted by a bad guy and deadly scenario (or even better given the enraptured tone these tales are usually told in, an entire horde of marauding criminals) with a rifle in their hand, concealed carry handgun on their waist or some over-the-top tactical rig under their clothes, providing them with a crazy combination of defense weapons.

When you hear this talk, you may get the impression these “iron blooded warriors” would take out evil-doers faster than you can say “Hollywood”, run full bore into incoming fire with little regard for pain or emotion and not bat so much as an eyelash at the prospect of sending their enemies to meet their maker if they ever found themselves in a gunfight. When I hear this type of talk though, I get the impression the shooter doesn’t know what they are talking about (not to mention, blabbing your self defense strategy could come back and bite you later on, either on the street or in the courtroom).

I have long stayed away from answering such “what if” questions for many good reasons, the most important being that no one—not even me—can tell you how you they or anybody else will react in a life or death situation.

The main reason I don’t often trade war stories about how I would react in hypothetical scenarios is because I know of what I speak, which is to say I know that I know nothing when it comes to attacks and my reactions. To help me explain this though (or why I feel this way) I’m going to have to ironically dig up a dangerous encounter from my past: 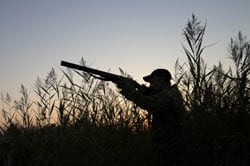 When I was 19 years old I was grouse hunting on my grandfather’s property, when suddenly I heard the sound of a bullet whizzing past me through some trees nearby.

This first shot rattled me and I froze—it was as simple as that and there was physically no way around it.  One minute I was out hunting, the next I was tharn (a term used to describe this deer in headlights condition, first popularized in Richard Adam’s Watership Down). It was almost as if my mind was functioning but my body wouldn’t follow the commands.  Run, shoot, hide—these were all things I knew existed, they were just things I found I couldn’t do at that moment.  For a second even, I couldn’t accept that I was even getting shot at—no this must be some mistake.

If I’m honest with myself, I don’t think it would have made much of a difference had this first shot sent me into high alert, defensive mode rather than briefly incapacitated me.  First of all, I had no idea from where the shots were originating and the complex patterns and thick vegetation characteristic of the Adirondack Mountains made it unlikely I would be able to discern my shooter’s position without exposing myself to fire for an extended period of time.

Additionally, I had nothing more than a side-by-side shotgun and a pocket full of shells on me.  This would have been a great option had the attack been hand-to-hand but I was facing ranged attacks. Where was my carry pistol?  Well, if I carried one at the time (I was just getting into pistols at 19), it would have likely been at home and could you really have blamed me?  I was out hunting in the middle of nowhere (these were also woods I had been hunting with my family since I was a tyke so they also had that “my own backyard” feel to them for me), not walking through the inner city with a wad of cash in my back pocket.  I was more worried about black bears than people and they could be taken care of with a loud shout or a couple of blasts from my scattergun if need be.

Even now, thinking through the scenario pretty much affirms for me that throwing a pistol into the equation wouldn’t have really made much of a difference because a) the shooter was using a rifle and was out of handgun range, and b) I didn’t know where the shooter was, period, because the attack came so quickly.

The first shot was followed by several more and these murder attempts thankfully removed all doubt as to whether or not I was the intended target, snapping me back to reality.  Instinctually, I sought cover.  I did my best to get small and ended up hiding behind a large rock as more rounds sailed by me or ricocheted off of tree trunks.

It’s worth mentioning here that even though I was somewhat protected by the rock, I did not by any stretch of the word feel my position was “safe”, in fact I had very little faith in the effectiveness of my cover.  For starters, I kept picturing this crazed sniper quietly changing his angle during any brief lulls in firing in an effort to catch a part of my body peaking out from behind the rock.  The fact that I only had a rough idea as to his position was perhaps the scariest part (aside from bullets flying past my head).

Secondly, I knew that larger caliber rounds could actually penetrate certain types of rock leaving me to pray that my rock wasn’t one of those types.  The bullets glancing off the trees around me didn’t help build any confidence in my defensive position either and though it’s been decades since this incident, just typing it out now makes the hairs on the back of my neck stand up

How many more rounds this maniac fired at me I don’t know but I can tell you I didn’t move from that spot for a long time even after hearing the last shot.  I found out later that the guy shooting at me was the owner of the neighboring property (which I was not on, making this a totally unprovoked attack).  Needless to say, he was not a fan of hunters but, to make the whole ordeal even more bizarre, he was also a member of law enforcement.

Response from the Peanut Gallery

As you can imagine, I have told this story many times over the years and the graphic nature of content has inspired all sorts of responses, from quiet sympathy to full blown tutorials on how I should have handled myself better. 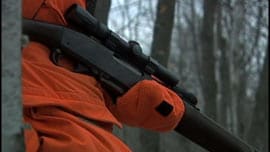 I’ve even had a few people suggest with carefully chosen words that I should have done something illegal, which adds a whole new dimension to why I can’t stand mall ninjas and their braggadocio.  “What if” statements like these, especially if they detail defense tactics outside the law, can come back to haunt shooters in a big way if they actually do end up in a gunfight or end up shooting an intruder. Be sure that after any deadly force incident, the police will question your friends and people you know and I sincerely doubt it would help your case if several people heard you talking about blasting some criminal into next week.

In our role as armed citizens, we train with our firearms to ensure that we are proficient with them.  The more we train, the better we get and the more the defense techniques we’re studying become second nature—that’s the point of self-defense training, to prepare ourselves to defend ourselves, and hard practice and repetition can go a long way towards making a responsive, educated shooter that reacts the way he or she should, according to the scenario.

Gun owners have already gotten a bad image over the years and almost all of it is false, but there are a few of us in our midst that are about as popular as Michael Vick at Pet World (and who do the gun world’s reputation as much good). Shun these slack jawed Walter Mittys and distance yourself from “what if.”  You will be better off in the long run.