Russia has AKs to spare.  The number of rifles stockpiled by the Russian ministry of defense is just crazy: 16 million AKs.  Russia actually has 17 million but 1 million are in service with the Russian military, according to first deputy defense minister Alexander Sukhorukov.  What do you do when you have 16 million extra guns?  Naturally, you plan on selling them.

But some aren’t in any condition for export.  Of the 16 million spare rifles, 6.45 million are worn out.  Which is just… how do you wear out over six million AKs?  That takes talent.  Of the unserviceable rifles, four million are headed to the great gun rack in the sky.

While it’s possible to rebuild many worn-out rifles, if these AKs have receiver damage it’s just not worth it.  Haul off what you can re-use, but we understand if they’re being sent back to meet their maker.  If it’s any consolation, the Russian press has stated that only the barrels are being destroyed—hope that the receivers are solid and can be re-manufactured into sweet, sweet surplus.

Another reason for not rebuilding these worn AKs is that Russia won’t be fielding them.  Although it is clear that we’re talking about more than just AK-47s, but we can’t say how many AK-74s or any number of other AK-pattern (or even AK-inspired) rifles that have been build over the decades, Russia is planning on issuing the newly-announced AK-12 to their entire military very soon.

The AK-12 is at a glance similar to the AK-47/74, but a closer look shows a whole lot of changes.  New sights, sight rails, controls, an ejection port cover, more rails, different furniture, a new muzzle device and some extra rails.  The only things that seems to be interchangeable with older AKs is perhaps the front sight block and the magazines.

The announcement that these rifles—or at least rifle parts—will be destroyed came as somewhat of a surprise, as originally plans called for them to be sent back to Izhmash to be recycled.  Izhmash, the primary manufacturer of AKs in Russia, has recently been tied up in an embarrassing little scandal. 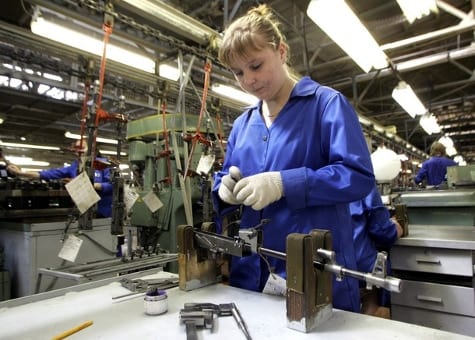 A Russian man delivering AKs from the ministry of defense to Izhmash decided to sell them off as firewood by the roadside.  Another man, after finding 78 rifles and a few spam cans of ammo in his wood pile called the police, and now Izhmash is under investigation for non-compliance.  So yes, the government does trust Izhmash to make rifles, they are wary of letting them “destroy” rifles.  However, the plan calls for the rifles or barrels to be destroyed by 2015, so Izhmash has time to clean things up and get to re-manufacturing.