The Utah Senate was poised to pass a bill that would prevent open (and concealed) carriers from being charged with disorderly conduct for simply carrying their firearms in public, but the bill died after lawmakers couldn’t agree on a substitute version of the bill that contained objectionable language.

In its original version, House Bill 49 (‘Firearms Revisions’) would prohibit a person who is lawfully carrying a firearm in public from being charged with non-firearm related crimes such as disorderly conduct or failure to disperse.

The official language of the bill read, ‘… in the absence of additional threatening behavior, the otherwise lawful possession of a firearm visible or concealed’ would not constitute a violation of Utah’s various criminal provisions and statutes.

The impetus for the legislation was a 51-year-old Orem man who was arrested for walking along sidewalk adjacent to a mall while carrying a rifle slung over his shoulder and a handgun holstered in his belt.  Both guns were unloaded, but police deemed his actions reckless. 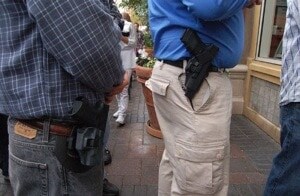 The man, Philip W. Taylor, was charged with disorderly conduct, fined $500 and placed on 12 months probation. He was also ordered to seek a mental health evaluation as part of his probation, according to court documents.

Sen. Curt Bramble (R-Provo), the bill’s Senate sponsor, told Deseret News that the bill would fix the ambiguity in the current law.

“The mere fact that you have a weapon that is either concealed or open carry, that in itself doesn’t constitute threatening behavior,” Bramble said.

Last Wednesday, by a vote of 22-4, the Senate gave preliminary approval of the bill on a second reading.

But then, late Wednesday night, lawmakers replaced H.B. 49 with a substitute bill that contained a new “displayed weapon” crime within the disorderly conduct statute, which undid exactly what the initial bill was intended to prevent (why those in favor of the original bill allowed this to happen remains unclear).

There wasn’t enough time to amend the bill, so it died when the Senate adjourned.