Not too long ago Chiappa took their exotic and unique Rhino revolver and re-chambered it in .40 S&W.  This was an interesting move on their part, but considering how much less expensive it is than .357 Magnum while still bringing a lot of energy to the party, it stands to reason that Chiappa would re-chamber the Rhino in another snappy caliber.

For the uninitiated, the Rhino is a completely different kind of handgun.  Designed by Antonio Cudazzo and Emilio Ghisoni the Rhino is a double-action revolver turned upside down.  The Rhino fires from the bottommost cylinder, which puts the barrel bore right above the trigger.  This makes the Rhino a very soft shooter.

In order to achieve this, the fire control group is unlike any other revolver on the inside, it could even be described as Byzantine.  And the hammer isn’t really a hammer, it’s a manual cocking lever.  The first few had… hard triggers.

Chiappa has re-worked them to a certain degree and while no one will say they’re the best, they serviceable enough.  And shooting the Rhino is just too fun.  It balances out and then some. 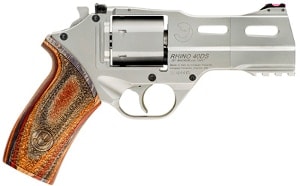 It’s not an exaggeration to say that shooting full-house .357 Magnum through a Rhino feels like popping off some hot .38s.  And it isn’t because the gun is a steel brick.  The Rhino’s frame is aluminum alloy, with the four-inch model weighing just 30 ounces.  It’s all about the bore axis.

So why come out with a new version chambered for 9x21mm?  Well, you can shoot 9x19mm in a gun chambered in 9x21mm.  Sorta.  The moon clips should work with both cartridges, but they do have slightly different tapers and of course, a 2mm difference in headspace. 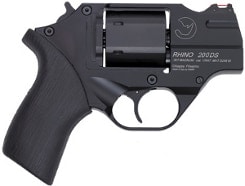 But it’s been done and most people feel comfortable with it.

The reason isn’t for cross-cartridge compatibility, it’s cartridge legality.  There are many countries that ban domestic sale of “military cartridges” to citizens.  Italy, home to Chiappa, is one such country.  In places where 9mm Parabellum isn’t legal, 9mm IMI is king.

Still, should Chiappa bring these guns to the US, let us show them our hospitality and find them all good homes.  Besides, this is probably a sign that a 9x19mm version is getting closer to reality.

Interested in these unusual revolvers?  If not, would other calibers change your mind?  Calibers like, say, .45 ACP?