Not all weapon malfunctions (i.e. anytime you pull the trigger and the gun doesn’t go bang) are created equal and sometimes you’ll find a quick fix isn’t just not possible, it’s not safe.  Remedial action is different than ‘immediate action’ in that remedial action should only be taken when you know the malfunction is going to take a bit longer to address, the classic example being a double feed.

Apart from malfunctions that could be addressed with an immediate action (e.g. empty chamber, bad ammo) which occur far more frequently, a double feed malfunction is the most common type of malfunction you’ll come across that necessitates the less common (though not less important) remedial action for support.

The Double Feed and its many Faces

Double feeds occur when either the brass or ammo fails to extract and becomes stuck in the chamber, but as to what happens after that there are many different things that can happen.

If the bolt grabs two rounds at the same time—what is known as a ‘true double feed’—the system will attempt to chamber both. Obviously, two rounds can’t go into the chamber at one time so the bolt will jam the rounds together, side by side or one on top of the other, forming a “V”.

Another thing that can happen is one round will get stacked up behind the chambered round with the bullet tip touching near the primer, which is needless to state quite dangerous.

The culprit is usually a dirty rifle though it could also be a bad extractor/ejector, a bad magazine, not enough lube or even a defect in some gas operating weapons not cycling all the way.

There’s also such thing as a triple feed. This is when you have a V-shaped double feed and an empty shell casing stuck higher up inside the upper receiver.  This condition impinges the charging handle from going forward making the gun inoperable.

Likely culprits? An empty shell casing can get back into the inside of the upper receiver if the shooter is in crowded cover, for instance, with shells being ejected about in tight spaces.  Shell casings can bounce off of walls and actually end up lodged in your gun, especially if you’re delivering high firepower environments.

But a more likely culprit for civilian operators is a weak ejector, a light load of powder in a particular round or a dirty or unlubed weapon.

These types of scenarios can cause what is known as a stove pipe.  A stove pipe occurs when an empty shell casing interferes with the bolt in the cycle of operation. The shell casing sticks out and the weapon fails to go into battery, resulting in some form of double feed.

With a deep stove pipe—one where the casing is really blocking the receiver—pulling the trigger will not cause the gun to fire because the bolt is not in battery and this trigger pull will have what shooters call a “mushy” quality to it.  With light stove pipes—which often occur when the casing becomes caught in the receiver at an angle by a corner—the trigger may even still give you a “click” when you pull it, even though the bolt is not fully seated.

Sometimes an immediate action will clear this type of malfunction, but not if there’s been a failure to extract too, like a round still stuck in the chamber.

When do I Perform a Remedial Action?

As I stated before in my article on immediate action, the moment your trigger goes “click,” you should automatically perform an Immediate Action Drill (IAD):

1.Tap the magazine
2.Rack the charging handle
3.Ready yourself to engage the threat

If you conduct an IAD and pull the trigger again, but nothing happens, that’s one way you’ll know you’ll need to perform a remedial action.

The other way you might know whether or not to perform remedial action is if your trigger is “mushy”.  With practice, you can hear and feel a malfunction requiring remedial action.  Failure to extract, failure to feed and failure to eject are the specific weapon operating reasons for failure in the cycle of operations.  It’s also important to look at the bolt face to see what the weapon’s doing. Left handed shooters have an advantage since they can see the bolt face without tilting the gun.

How do you perform remedial action?

Though the Army Field Manual for the M4/M16 says to rip the magazine first, I believe locking the bolt to the rear first gives the advantage of taking the pressure off the rounds in double feed malfunctions.  Pulling the bolt back additionally allows the shooter to do something very important to remedial action—see the bolt face and thus really know what the weapon is doing (or doing wrong).  It also allows any spent casings or jammed up ammunition to simply fall out of the gun once the magazine is ripped out.

It’s also important to seek cover when possible.  This might not always be possible, so practice remedial action slow at first, but then speed it up to ensure you are returning to the firefight as soon as possible.  Here are the steps:

1.Lock the bolt back, but always attempt to push the charging handle forward first.  Sometimes this is all it takes to send the round into battery.
2.Rip the magazine out
3.Observe the bolt.  This may reveal the need to jam two fingers up the magazine well to free the double feed.
4.Rack the charging handle two times
5.Reload with a fresh magazine.  Be sure to charge the weapon if you reload on a closed bolt.

Keeping the muzzle on target or higher (especially keeping the muzzle high when running to cover, or ingress/egress—which is to say entering or leaving—a property) helps maintain tactical advantage and will allow gravity to help the situation, forcing the stuck rounds to fall from the chamber and out of the mag well. 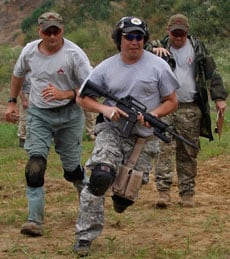 If you’re on target and you pull the trigger, but nothing happens, you’ve just experienced Murphy’s Law–if it can go wrong, it will go wrong. You need to get back in the fight. Quickly! Keep your head up, eyes up and gun up! This is necessary for maintaining tactical advantage; you’ve got to see the threat.

Often tactical scenarios make it difficult to literally see problems, particularly a round stuck in the chamber so getting familiar with these conditions can greatly increase your chances of success in combat.  It’s also why it’s important to ensure you rack the charging handle two times during a remedial action.

When you practice, get in the habit of performing malfunction drills from behind cover, moving to cover, in the dark and with a handheld flashlight. These should be high stress environments as remedial actions represent a moment in battle when you may have to balance focused thinking and problem solving with extreme “distraction”.  Also, be sure to do these drills from 25 yards from a target/threat and greater, because if you have a secondary weapon, you should transition at this distance.