The gun dealer who was responsible, in part, for the negligent discharge that killed a man at a 2007 social event in Hollidaysburg, Pennsylvania, has reached a settlement with the victim’s family.

On Sept. 12, 2007, employees of Digital Solutions Inc., gathered at the Hollidaysburg Sportsmen’s Club in Frankstown Township.

On display at the party was a refurbished Gatling gun, which was owned by the president of East Coast Gun Sales, James Faith.

During a demonstration, the water-cooled, truck-mounted machine gun jammed (it was mounted on a Humvee). 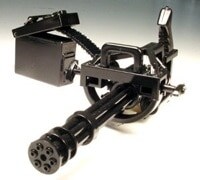 Michael Kurty an auxiliary police officer and firearms instructor for local law enforcement agencies was asked by Faith to help clear the jam.  The 36-year-old agreed.

Since the gun was powered by electricity, Faith unplugged it thinking that this would prevent it from firing while the two men removed the jammed bullet.

According to lawsuit, Faith “did not know which direction was appropriate for rotating the barrel of the gun in order to safely clear it.”

As Faith rotated the barrel, the gun fired.  The bullet hit Kurty in the head, fatally wounding him.

Laura Kurty, his wife, was in earshot of the incident when it occurred, according to the lawsuit.

In addition to his wife, Kurty is survived by four children.

Following the tragedy, Kurty’s family filed a civil lawsuit against Faith and East Coast Gun Sales as well as several other parties, accusing them of negligence for bringing the ‘minigun’ to a place where the public could gain access to it.

In the lawsuit, the family was seeking upwards of $3 million in damages.  And last week, after years of waiting, the parties involved reached an undisclosed settlement.

Faith’s Attorney, Daniel S. Altschuler of Philadelphia, told The Altoona Mirror that, “he was not permitted to comment on the settlement, which may not be made public.”

On a tangential note, Faith’s store, East Coast Gun Sales, started a going out of business sale on Feb. 11.