On Monday, the Kansas House of Representatives passed a bill that would allow citizens with valid concealed carry permits to carry handguns into government buildings provided that the building lacks sufficient security.

Additionally, the bill would make an exemption for colleges and nursing homes, which would not be required to allow CCW permit holders to carry a firearm onto the premises. 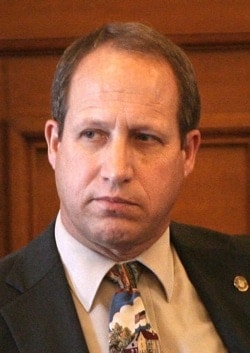 To be more specific House Bill 2353, which passed by a vote of 74-50, allows CCW permit holders to carry concealed firearms into government buildings unless the building “has adequate security measures to ensure that no weapons are permitted to be carried into such building.”

Sponsor of the bill, Rep. Forest Knox explained the intent of the bill.

“It is about safety,” the Altoona Republican told the Emporia Gazette. “You’re not afraid of illegal guns that are already there but you’re afraid of law-abiding citizens who are carrying guns? And I think the public sees that point.”

Knox originally wanted to go further, his version of the bill included colleges and universities under the same arrangement, i.e. if a campus lacked sufficient security, then a student, teacher, faculty member, etc. should not be prohibited from carrying concealed on campus grounds.

But the House Committee of the Whole amended that portion of the bill, giving an exemption to colleges and nursing homes.   The exemption passed by 93-23 vote.

Many House members were critical of the college/university aspect of the measure, arguing that it may have had violent consequences.

“If I give a student a poor grade or if I say something they don’t like, and they have a weapon, I don’t know if they would shoot me,” said Rep. Valdenia Winn, a Kansas City Democrat and a professor at a community college.

“This bill is crazy,” she added. “As a professor of history, I have to fear for my life? I teach history. I don’t want to be history.”

It’s clear that the way the bill is written creates an obvious problem, a problem that has two potentially detrimental consequences.

The problem is that instead of expanding self-defense rights for law-abiding citizens, the bill would only force local governments and municipalities to ramp up ill defined and fallible security measures. 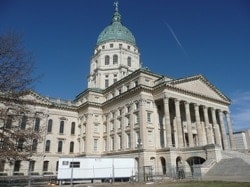 A lobbyist for the Unified Government of Kansas City, Kan., and Wyandotte County, Mike Taylor, told the Emporia Gazette that it would “cost $1.1 million for new metal detectors and another $1 million a year on staffing if officials there attempted to make all of the buildings secure enough to avoid having to allow concealed weapons.”

So, consequence number one is the cost associated with ensuring that each government building has ‘sufficient’ security.

Consequence number two is that the security measures leave everyone inside the building unarmed.  If an armed sociopath circumvents security at the front door (breaks in through a window) or even outright kills the several guards at the entrance, who’s to stop him from killing the unarmed innocents inside the building?

While the bill represents a small step in the right direction, its shortcomings are clearly pronounced.  It of course begs the larger question, why don’t they just allow CCW holders to carry everywhere?  It’s way more economically viable than the alternative security solution and it restores one’s fundamental right of self-defense.

Moving to the Senate

H.B. 2353 will now head to the Senate for review and consideration.  Rumblings from the capitol intimate that the bill will have an uphill climb to the Governor’s desk.  We’ll keep you posted.