When it comes to their guns, shooters are a notoriously fickle lot. Though often expressing near universal approval for all things firearms, gun owners are quick to shun a particular weapon for the smallest and most subjective of reasons, things like, the trigger “feels off”, or they “don’t have faith” in the calibers it comes chambered in or the gun “can’t find a groove”.

All in all, I think this fickleness is a good thing and keeps the firearms market on its toes, but it’s also a quality I feel a lot of shooters don’t bring with them when it comes time to buy basic gun accessories.

Even on today’s overblown market, there are still a lot of good accessories coming out, but far too often, gun folk are more than willing to burn money on shiny gadgets about as helpful to shooting scenarios or gun ownership as a glass hammer, while paying little to no attention to those basic accessories almost every shooter imaginable should own.

What are these basics?  Well consider this: people have been carrying guns for a long time now and shooters back then had to contend with the same issues facing shooters today.  Accordingly, our “fore-shooters” developed products and took to carrying other items (just as we do today) that they simply thought went hand in hand with shooting and if we glean back over this history of what these “golden generation” shooters considered indispensable, we get a pretty clear picture of what accessories stood the test of time as essentials:

Perhaps the biggest essential rifle accessory that I see gun owners skimp on time and time again is a quality gun case. Simply ask yourself this: why would you spend all that money on a new rifle and then trust its welfare to a case that cost only a few dollars?  In life, when are such scenarios ever a good idea?

At one time I tried one of those hard plastic cases like you get from the big box stores like Wal-mart.  It cost less than $50 (the cheaper but not the cheapest they offered) and I found that, though the case held the gun well enough, it was just dreadful for carrying a gun of any value.  The design was clunky to transport and barely immobilized the gun inside the case. I also had very little faith in the manufacturing quality of the crude snap hinges that secured the gun.  It did the job I guess, but only if you moved the thing with kid gloves on and what’s the point of that?  A case should protect the gun through transport, not potentially break the gun if you move it!

When I bought some more expensive guns, I decided to spring for a few nice cases of polymer or even stainless steel.  To tell you the truth, these cases don’t cost a fortune, with the cheapest quality hard cases starting at around $100 and going up to around $300 on the high end.  Remember though quality does not always have to set you back a whole heap of money, just trust your instincts when you’re evaluating its construction and really look around and see what’s out there.  Don’t just go to one place.

A thrifty compromise though to a moderately priced hard sided gun case is a nice soft sided case.  These are decidedly less expensive than hard cases, but watch out because they are not as formidable, either.

Soft-sided cases should have a decent amount of padding so the gun doesn’t get damaged if it gets dropped and thick enough to stop any parts of the gun or sharp instruments from puncturing its sides.  The newer, nylon cases work well for this but so do older styles made of leather and even wool and cloth. These cases don’t have to cost a fortune (quality cases start around $30 but rarely go higher than $100). 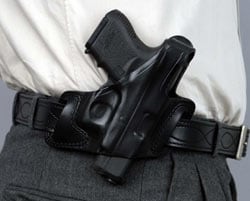 I picked up a very nice case once for my blackpowder rifle that was made from an Indian blanket for a bit more than those cheap thin cases and it has held up for a long time.

The merits, practicalities and mulit-faceted applications of handgun holsters have been covered so many times here on Guns.com that it would almost seem silly to reiterate them here.  Almost.

So, let’s just say this one thing about them in this article about gun accessory essentials—whether you plan on carrying your gun everyday or keeping it in your nightstand for self-defense, every handgun you own deserves a holster

Say you have a nice single action revolver like a Colt SAA that you want to go packing around and you want to carry around some extra cartridges. You could just toss them in a pocket but there are better ways.

A cartridge slide that will fit any of your typical pistol calibers will usually be very cheap (new about $8 slightly used even cheaper).  These usually hold ten rounds or more and allow the gunslinger on the go to reload their revolver one round at a time.

For a little more sophistication you can get an old school cartridge dump, or a strip clip.

Cartridge dumps were popular in law enforcement circles before speedloaders took over and their function is very simple. You put the rounds in the top and then when you need them unsnap the bottom of the pouch and you had a couple of rounds instantly. I don’t know of anyone who makes them currently but you can find them used for only a couple of bucks and hey, they still do a pretty good job.

If you really wanted to ratchet up the tactical efficiency though, go for a strip clip like the Quickstrip. When you think about it, products like these are at their heart, really just redesigns of the old cartridge slides.

Since time en memoriam knives and guns have been considered a vital pair of instruments in survival settings and yet despite this, I’m often shocked at how many people I know go out into the woods or go to the range without a knife on them. 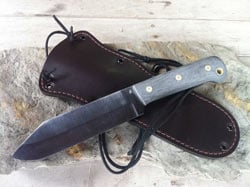 A knife may be the most universal tool you have on you at any point in your life and much of this tool’s adaptability can be used to address the idiosyncrasies associated with shooting. For example, you can use the blade to remove a shell that won’t extract, to turn a sight or scope screw if you are off target, to loosen magazines for disassembly, to unscrew scope mounts and muzzle attachments. We haven’t even scratched the service, especially if your knife is Leatherman style device with a lot of accessories of its own.
But also realize you can buy a good knife for a lot less money than one may think, despite some advertisements and reviews, especially if you have a little woodsman’s wisdom in your back pocket.
I have been carrying the same Uncle Henry folding knife for more than ten years, I have gutted deer, fish, extracted a few jammed shells, tightened some grip screws and more things than I can remember, and that knife cost me less than $15. If a fixed blade is more your thing, then I recommend something from Blind Horse knives which go from around $50 to several hundred dollars.  I have one and it has done all that I have ever asked and I got it for far less than a hundred dollars.

There are a lot of accessories that the gun owner should have, a good holster, a knife, something to carry your ammunition with, a good case for transporting the firearm, but there are also a lot of other things a dedicated shooter should have in their possession: a decent screwdriver set, a rifle scope, the list goes on and on. Acquiring them should be just as much fun at times as buying the gun itself.