Israeli Weapon Industries (IWI), manufacturer of the iconic UZI, developed an updated version of their submachine gun for the 21st century.  The UZI PRO shares some of the family resemblance but is a whole lot different, not just on the outside, but on the inside.  The construction uses new materials and the operation is significantly altered.

The UZI PRO stands out first and foremost for having a polymer receiver.  Yes, this sub-gun is plastic fantastic with a polymer lower.  The upper is still stamped steel and bears a striking resemblance to the Micro UZI.  The PRO uses the same top rail configuration with a set of backup iron sights.  It weighs considerably less at just 2.3 pounds. 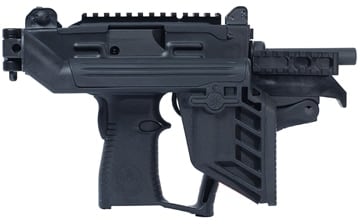 The lower is very different, however.  It extends forward along the barrel to provide three additional Picatinny rails at three, six and nine o’clock.  It has an enlarged handguard around the entire grip for a semi-exposed trigger and an adjustable folding stock with a cheek riser.  It maintains the grip safety and manual safety but has an improved, more ergonomic grip with a traditional pistol magazine release.

The major change to the operation is that the UZI PRO no longer fires from an open bolt.  It fires from a closed bolt, which IWI claims improves accuracy and reliability.  While that’s undoubtedly true, it also opens up the export market to countries like the US which prohibit the manufacture and importation of open-bolt weapons to most people (because they can be easily modified to fire fully-automatically and sometimes cook off—fire fully-automatically unintentionally).

UZIs were in service with the IDF since the mid-’50s, as a pistol-caliber primary arm for armored cavalry and mechanized infantry and the like, as well as a close-quarters gun by Israeli special forces.  It was never known for great accuracy, instead relying on a nice rate of fire (600-1,200 rounds per minute depending on the model) and good reliability in the desert to make it popular.

And it was quite popular, with sales outside the IDF to include militaries and police forces in almost half of the countries in the world including the US to our own Secret Service.  Not too long ago the IDF retired the UZI and replaced it with another 9mm submachine gun, the Micro Tavor, or X95, also manufactured by IWI.  While the enhancements to the PRO make it stand out against the Micro Tavor, we don’t expect the IDF to completely replace all their submachine guns with the new UZI. 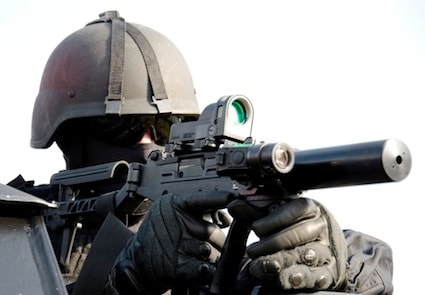 In fact, it’s been in production for two years now, but this is the first time the UZI PRO is getting real publicity; before this year, it was primarily circulating around the IDF for review.  But as Tactical Life points out, the PRO is finally going on world tour.

Like the original UZI, the PRO is expected to be popular with special forces and private security.  It will be available in two versions, standard or with an UZI PRO-specific thread-on suppressor.

And it goes without saying, we want a go with a PRO, and hope that IWI follows up this new UZI with one tailored for civilian sale quickly.