Retailers of firearms and ammunition in and around Killeen, TX, reported that ammo is in short supply these days.

To explain the cause of the ammo shortage, some retailers cited greedy suppliers looking to exploit the market by hoarding inventory, while others pointed to the growing unease that President Obama will be reelected to a second term this Fall, one in which he will have free reign to implement draconian gun control policies.  This, they argue, keeps demand at a high.

“It’s been busy for quite some time, but in the last month, I’ve noticed that when I call the distributors, there’s really nothing available,” Guns Galore Manager David Cheadle told the Killeen Daily Herald. 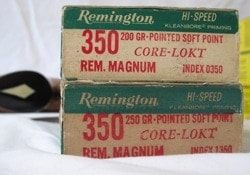 He added that the spike in ammo sales might have something to do with people getting their tax returns, but said, “Whether there’s another force behind it, I don’t know.”

Steve Hall, the director of the National Rifle Association’s Texas affiliate took a page from the association’s Executive Vice President, Wayne LaPierre, and explained that in the eyes of many gun owners President Obama is an anathema to the Second Amendment.

“A lot of (the shortage) is driven by fears of Second Amendment rights being taken away or eroding,” Hall told the Killeen Daily Herald.  President Obama has remained silent on the subject but “he has definite known members in his Cabinet that are gun control supporters.”

In other words, the ammo shortage in parts of Texas may be the beginning of the second ‘Obama Gun Boom’.

Others say that the shortage has more to do with large ammo suppliers getting greedy and manipulating the market. 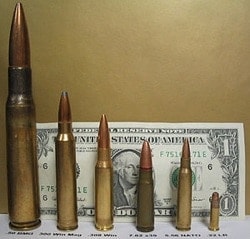 Johnny Wade, owner of Nocked and Loaded in Lampasas, TX, explained that he has seen some of the least expensive bullets jump in price, from 30 cents a apiece to 48 cents each over the course of the past few months.  He added that those large suppliers might be hoarding cheap ammo to maximize profit as demand rises.

“About three weeks ago, my people said ‘If you want to get some inexpensive stuff, it is disappearing by the truckload,'” he told the Killeen Daily Herald.

But Jean Tran, owner of JT Sports in Copperas Cove, said that although suppliers have notified her that prices may rise 10 to 50 percent in the coming months, she’s not having trouble filling orders.

Tran’s assessment was backed by Alice Tripp, the legislative director for the Texas State Rifle Association.  She said she has not received any complaints from suppliers, like she did when Obama was first elected.

Given the available facts, at this point it’s difficult to tell whether these ammo shortages in Texas are a sign of things to come.  But we’ll keep you posted as more information becomes available.

In the meantime, have you noticed a rise in prices or a lack of supply at your local retailer/FFL?  If so, how do you explain them?