Heizer DoubleTap Gearing up for Shipping

Heizer Defense’s recently-announced DoubleTap has been creating a lot of excitement in the world of derringers and concealed-carry.  This twin-barreled pocket pistol has been turning heads left and right with its original looks and modern construction.  Heizer is now prepping the DoubleTap for shipping to vendors at the end of this month and through April. 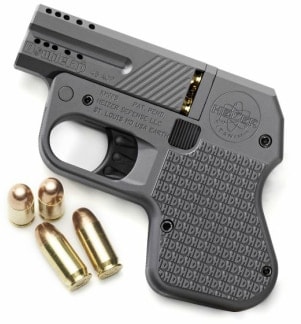 Originally announced in .45 ACP, the DoubleTap will be offered in two chamberings, adding a 9mm option.  Both models will be made with ported or non-ported barrel assemblies, which house two 3-inch barrels.  The frames will be made from two different materials, either aluminum or titanium.  The aluminum model weighs 12 ounces and the titanium 14.

The controls are very simple with a double-action only (DAO) trigger and an ambidextrous thumb latch to break open the breaches and eject the cases.  The grip houses two spare rounds.  The DoubleTap has no external safeties.

In addition to being extremely lightweight in either aluminum or titanium, the DoubleTap is a very small handgun.  At 5.5 inches long, 3.9 inches tall, and just .665 inches wide the DoubleTap can be carried by anyone wearing almost anything. 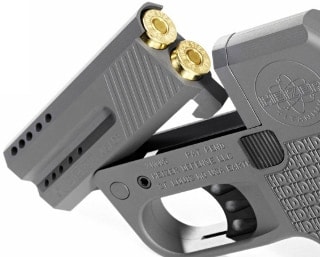 We have to say we approve of a 9mm model as any gun this lightweight with a fixed barrel is going to be rough on the hands, especially in .45 ACP.  There is more good news on that front as Heizer will be selling barrel assemblies separately as caliber conversion kits.  You will be able to pocket a .45 and get your range time practice done with 9mm as an option.

The MSRPs on these guns is not terribly high.  An aluminum-framed non-ported DoubleTap in either 9mm or .45 ACP has a $500 MSRP, $570 for the ported version.  The titanium DoubleTaps run a premium which is understandable; the MSRPs are $730 non-ported, $800 ported.

Real-world prices may be lower, but it’s not uncommon to see the prices for new and innovative firearms with a lot of demand be all over the map.  We were completely taken by the DoubleTap at this year’s SHOT Show, and we fully expect others to be just as smitten.

Still, the DoubleTap is clearly more than just a novelty.  It’s a conversation piece that has the potential to save lives.