Last Wednesday, a jury found Virginia Tech negligent in the way it handled the 2007 massacre that left 33 people dead.

After 3 ½ hours of deliberation, jurors came to the conclusion that the delayed response by campus officials after the first shootings occurred led to the wrongful death of at least two of the students killed in what was the most deadly shooting in modern U.S. history.

The families of two of the victims, Erin Peterson and Julia Pryde, refused to take their share of the $11 million settlement offered to victims’ families by the University in 2008, and instead took the state to court in a wrongful death suit.

In their civil lawsuit, they argued that university police and administrators waited several hours before sending out a campus-wide warning that two students were shot dead in a dorm.  And when officials finally did send out the initial warning, it did not mention that Seung-Hui Cho, the shooter, was on the loose.

Unfortunately, it was during those critical hours that Cho made his way from the dorm to Norris Hall, a classroom building.  There, he chained locked the doors to the building and killed 31 more people, including himself.

During the trial, state attorneys countered by arguing that there was no way to foresee the tragedy.  Moreover, that given the available information campus police believed it was an isolated shooting.  In lieu of a campus alert, police opted to proceed in their pursuit of a “person of interest,” a boyfriend of one of the victims.

Later on, when it became clear that the boyfriend was not the shooter, a subsequent alert was sent out by tech officials warning that a “gunman is loose on campus.”  This alert went out at 9:50 a.m., nearly 10 minutes after Cho began the Norris slaughter, which was too little, too late.

The jury awarded the families $4 million each.  However, that award will be sharply reduced, as Virginia state law requires the award to be capped at $100,000.

But for the families of the victims, it wasn’t about the money.  It was about pursuing justice and holding the university accountable for failing to act. 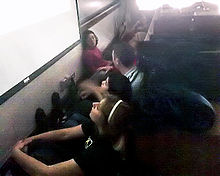 “When you know that something is right you’re not deterred from your course,” said Celeste Peterson, the mother of Erin Peterson. “We wanted the truth from the very beginning and we got it. All I know is today we got what we wanted.”

Meanwhile, and despite the verdict, the university maintains that they did every thing in their power given what they knew.

“We are disappointed with today’s decision and stand by our long-held position that the administration and law enforcement at Virginia Tech did their absolute best with the information available on April 16, 2007,” Virginia Tech spokesman Mark Owczarski said in a statement.

But Robert T. Hall, an attorney for the family, directly disputed that long-held position.

“The university’s contention has been all along, to quote president [Charles] Steger ‘We did everything we could do,”‘ Hall exclaimed. “Obviously the jury didn’t buy that.”

“It’s so clear that a warning should have been given,” he added.  “The amount of the verdict speaks to that end.”

What are your thoughts?  Could the university have done more that day?   Do you agree with the jury’s verdict?