I have been involved in tactical and self-defense handgun training for over three decades now and over the years I’ve heard more than a few colleagues mention that police officers and military personnel who take damage to their dominant (a.k.a. shooting) hand or arm will likely continue to use their injured appendage throughout the rest of the gunfight, almost as if they don’t realize they’ve taken a hit.

To me, this phenomenon actually makes a lot of scientific sense but more significantly it underlines the importance for shooters to practice one hand shooting techniques with both their dominant and off-hands. We’re going to look at three single handed shooting techniques you should practice (and master).

Why shoot with one hand?

First, it’s important to understand why you would end up shooting with one hand rather than adopting a proper shooting stance and taking advantage of using your support hand and the reason is you. Well, more accurately it’s your brain and how it will react under stress. 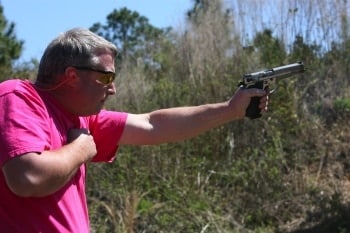 If you’ve trained your entire life to draw and shoot (or point shoot) with your dominant hand, the likelihood of you adopting some unusual and uncomfortable shooting position on the fly, when the bullets are flying, is remote. This is especially true if this is an action that you have to think about, rather than one that comes naturally to you through conditioning and training, and that hesitation is more than enough to cost you the fight.

On top of that, while immersed in the stress of a lethal confrontation, the shooter will likely be experiencing a powerful and numbing wave of adrenaline and endorphins. What this can mean is that though the shooter may transfer their weapon eventually to their uninjured off-hand, they probably will not immediately, partly because of the haze-inducing hormones coursing through their bloodstream. Heck, there’s a good chance the shooter may not even immediately recognize they’re injured let alone be able to take steps to address that injury and it is not unheard of for troops who lost their entire arm in battle to experience “phantom movements” as they desperately attempt to draw their gun with an arm that isn’t there.

Accordingly, there is high value in knowing not just how to accurately shoot one handed with your off-hand, but also how to do it with your dominant hand as your body may “make the call” to shoot with this hand for you in the heat of battle. There’s also a litany of other practical reasons you should master shooting with one hand—say you’re holding an item you can’t afford to drop like a flashlight or you’re opening a door or you’re trying to rescue someone in danger/hold a bad guy with your other hand—but I think the potential for injury makes a strong enough case on its own.

The main issue to contend with all single handed shooting positions is the absence of a support hand to steady your handgun. Each technique addresses this matter in its own way, but all work to immobilize the gun as best as possible and rely on the transition from muscular support to skeletal support to some degree.

The first and most basic position is the standard, straight arm position with the weapon parallel, straight up and down. Simply:

This position does the best job replicating natural shooting and bears striking resemblance to point shooting—the key being a clear sight picture but above all a smooth trigger pull.

The second technique may seem a bit unusual to some shooters, but believe me when I say it is a tried and true method of one handed shooting and some people just have more luck with this style than the standard, straight arm. It requires the shooter to hold the gun with a slight “inboard” (i.e. towards your body) cant. The technique is almost identical to the straight arm method, only with the addition of the turning the pistol:

While I was a SWAT pointman, I used this technique to shoot at threats while positioned behind and looking through the glass window on tactical shields (a.k.a. body bunkers) and, though this technique may seem unorthodox, with practice, you can get really good. Just avoid over canting the weapon—“gangsta-style” simply doesn’t work well at all.

Keeping your elbow locked in this manner is to immobilize the gun so that it doesn’t move from recoil. Keeping your elbow down is so that a) you use bone more than muscle to support the pistol, and b) you don’t get your elbow shot off or telegraph your position if you’re peaking around a corner.

What do you do with your support hand?

If you’re not wearing body armor, and you’re not in a bladed stance, consider angling the forearm of your non-dominant arm across your chest. Frankly, you’d be better off getting shot in the forearm than taking one in the lung or the heart.

The hope is that if you get shot in center mass, the round will stop in your arm. If the round goes through your arm, the hope is that it will stop before penetrating too deeply into your chest cavity. Remember, the short and skinny explanation is that shot placement and penetration is what kills, so, consider putting your Popeye forearm on your chest, over something vital (and if you have bullet proof Wonder Woman bracelets, you’re even in better shape).