Some pistol shooters are born fast, some acquire their quick draws through grueling practice and repetition and then there are others graced with firearm abilities that cannot be explained. One such quick shooter was D.A. Bryce, an FBI agent who started out as a child shooting and would become one of the best pistol shots who ever lived.

Born with a silver gun in his mouth

D.A. Bryce was born in Mt. View, Oklahoma in 1906.  Many years later in 1945, Bryce’s sister Lila Dawson recounted a “tall tale” for LIFE magazine that when her brother was teething his parents let the young boy chew on her daddy’s unloaded pistol, imbuing him with a latent understanding of firearms and explaining his supernatural talent with them.  Lila rejected the notion that pistol teething contributed to her brother’s gun prowess in any way, though confirmed the practice of allowing Bryce to teeth on an unloaded handgun (try pulling something like that today and chances are you’ll have child protective services at your door before you can say “political correctness”).

The young Bryce apparently early on was noted for being an exceptional shot with all types of firearms (handguns, rifles and shotguns), and he tempered his skill hunting game for the family with his grandfather. When reporters asked Leah Rhymer, a childhood friend of Bryce, to describe Bryce’s ability with his first gun, a .22 rifle, in the 1940s, all she said was, “He never missed… Never. He was a perfect shot.”

He would later reflect on this period of his life and how it formed him as a shooter, explaining that because times were tough, game was scarce and ammunition was precious, Bryce had to make every shot count. This frame of mind would prove useful later on in life for D.A. Bryce.

One-hundred dollars in gold (and a gold star too) 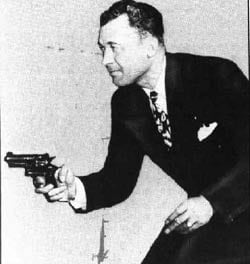 Bryce’s career in law enforcement began when he was on his way to enroll in the University of Oklahoma and found out about a pistol shooting contest where the prize was one hundred dollars in gold. When he arrived the Chief of Police for the Oklahoma City Police Department tested his ability. Bryce put six shots no bigger than a dollar into an envelope stuck in a tree. After he picked his jaw up off of the ground the Chief exclaimed that Bryce was now a member of the Oklahoma City Police Department. Bryce also went on to win the hundred dollars in gold.

In those days Oklahoma City was a rough and tumble town as the Wild West was not a distant memory, and D.A. Bryce would not have to wait long to see action. He was involved in his first shooting after only a couple of days on the job (the OCPD didn’t even have a badge ready for him yet).

Bryce was leaving a diner and saw a car with a man in it that he thought was acting a bit odd. Bryce questioned him and when he told the man he was a police officer he tried to pull a gun on Bryce. The young peace officer shot him dead. Bryce unfortunately was so new on the job that not having a badge landed him in jail. He stayed there for a day until the police Chief found out where he was and sprung him.  Bryce was back on the job the next day.

In 1927 Bryce was on patrol alone when he saw two burglars trying to break into a store. When confronted, the two would be thieves opened up on the lawmen who promptly killed them both, with only one shot each. Bryce then brought the two dead burglars to the Chief and asked what he should do with them. The Chief replied “Take them to the morgue, son.” Bryce had killed three men in only his first year on the job.

Bryce’s most well known exploit came on July 18, 1934 when it came to local law enforcement’s attention that three outlaws (one being Harvey Pugh, a former associate of Clyde Barrow) were staying at the Wren Hotel in Oklahoma City. When Bryce tried to question the owner of the hotel the door was nearly slammed in his face and he shoved his way into her room. There was the young, unnamed owner and one J. Ray O’Donnell, who was holding an automatic pistol in each hand. Bryce’s gun was still holstered. As O’Donnell raised his guns to fire, Bryce drew his revolver and the first bullet struck his attacker in the chin. Four shots followed right behind that one with the sixth ending up in the mattress on the bed behind him.

One of the most memorable qualities about Bryce was that he was always a snappy dresser and it was his fashion sense that earned him his nickname of “Jelly”. The name came about when Bryce and his partner got into a gunfight with a couple of crooks and one of them crawled into a movie theater where he passed out. When the bad guy woke up, D.A. Bryce standing over him.

The outlaw later told police that, looking up at Bryce, he could not believe he had been “killed” by a jelly bean like Bryce. In those days jelly bean was a term for a fancy dresser and the nickname “Jelly” stuck.

Teaching the Feds to shoot

After the shootout at the Wren Hotel, Bryce was scooped up by the F.B.I. in November of 1934 and though he would be involved in several more gunfights, it would be his exploits as a shooting instructor that would garner him national attention. Bryce carried a Smith & Wesson .44 Special with ivory grips that had an embossed black cat, the number 13 and a steer’s head on the other side. When Smith & Wesson first introduced the .357 Magnum Bryce acquired one of the first courtesy of his federal credentials and set about experimenting with the round.

Bryce practiced his method of fast draw (sometimes for eight hours straight) in front of a mirror and from these sessions, he was able to identify potential problems and fine tune what was already an extraordinary mastery of the defense tactic. Crucially, Bryce shifted the shooters weight slight forward, so that if the officer is hit, he will fall forward and be able to keep firing.  This stance later became the standard for law enforcement for decades to come. 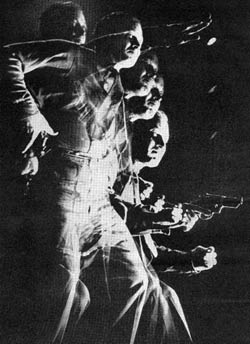 As a part of his job instructing the FBI, Bryce performed shooting demonstrations.  These “performances” became legendary and they would eventually take on a life of their own, apart from his career in law enforcement as Bryce was regularly called upon to wow audiences with exhibitions.

Some of Bryce’s most memorable “tricks” were so difficult, even today they can only be performed by a handful of shooters (part of this is just nature as Bryce’s eyesight was said to be 20/10, nominally two times better than 20/20 vision).  For example, Bryce a would take a pill box and place it on the back of his shooting hand.  He could draw and hit it before it reached his waist.

Bryce would shoot Mexican Pesos with a .22 rifle hitting them in such a way on the edge, that he could turn then into a “watch fob”—a small ornament used to hold pocket watches. He could also shoot clay pigeons with his .357 revolver, even while holding the gun upside down.

Bryce was well known for the large diamond ring he wore. He would use that ring as a mirror and shoot targets over his shoulder using his .357 Magnum. When he broke a clay pigeon he would then pick off the fragments the same way using nothing but that ring to aim with.

The ubiquitous Life magazine attempted to measure exactly how fast the lawmen could draw and fire he drew his .357.  He got off a shot on target in two fifths of a second.

D.A. Bryce retired from the F.B.I. in 1958 and ran for governor of Oklahoma after being fed up with the corruption going on across the state.  He lost but still placed better than any candidate on a third party ticket when he ran on the “throw the bums out and clean house” ticket.  Bryce’s later years were marked by tragedy, though.

His wife Shirley was in a bad car wreck and her injuries never fully healed. In August, 1973 she passed away and from that time on D.A. Bryce was never the same. He was forever worried that someone would take revenge on his son for his work as a lawman.

At a gathering of retired F.B.I. agents in May, 1974 he seemed tired and wore out. That Saturday he went to his room after dinner early. The next day some friends went to his door but there was no answer, assuming he was sleeping. D.A. Bryce had died in his sleep the night before of a heart attack. D.A. “Jelly” Bryce was buried beside his wife.