Tomorrow, a Michigan Senate committee will review a bill that would remove many of the burdensome barriers in the concealed carry issuance process, making it easier for law-abiding citizens to obtain CCW permits.

The sponsor of this new legislation is state Sen. Mike Green (R-Maryville).  A long-time proponent of concealed carry and gun rights for responsible citizens, Green ushered in the state’s “shall issue” policy back in July of 2001.

Now, with this new bill, Green wants to further streamline the permit process, remove objectionable restrictions and fees, and expand the number of places where permit holders are allowed to carry provided that they satisfy certain training requirements.

As reported by Mlive.com, here are the proposed changes to Michigan’s concealed carry law, in Green’s bill, that the Senate’s Natural Resources, Environment and Great Lakes Committee will review and consider:

• Establish a “shall issue” exemption allowing highly trained permit holders to carry guns in pistol-free zones. An extra nine hours of training and 162 more rounds fired at the range would be required beyond current basic requirements. 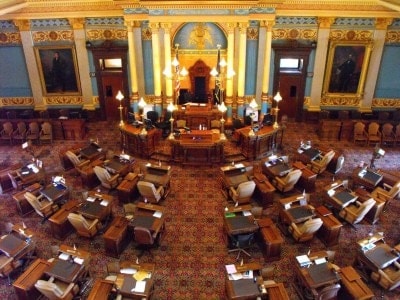 • Require firing-range time for basic applicants include 98 rounds, as opposed to 30 now.

• Require licenses be approved within 45 days or a temporary license must be issued.

• Counties could no longer charge extra money beyond the $105 application fee for taking photos, laminating, and other add-ons.

• Applicants who unsuccessfully appeal a denial in court would no longer be forced to pay the county’s court and attorney costs.

• Courts could award increased financial penalties to those who successfully appeal.

• Renewal notices must be sent three to six months before expiration, to avoid unintentional lapses.

Notes and Thoughts on Changes

It’s curious that they increased the number of rounds to be fired for the basic permit.  Perhaps this is the quid-pro-quo part of the bill.  That is, in order to quell opposition and get this overhaul enacted, Sen. Green had to up part of the training requirement, so he decided to change the basic permit range training from 30 rounds being fired at the range to 98 rounds.

Another aspect of the bill that shows some sensitivity to potential opponents is that there are provisions aimed at ensuring the mandatory annual reports on permit holders who have trouble with the law are more accurate.

According to an investigation by MLive.com last year, prosecutors and clerks failed to report convictions and revocations for gun- and non-gun crimes.  This bill would provide additional clarity with respect to reporting and following up on those issues (to read more about the investigation, click here).

Overall though, the bill is a step in the right direction.  And perhaps the most important part of the bill is that it would remove a layer of bureaucracy by eliminating those 83 county gun boards that now weigh in on whether one can carry a concealed handgun.

Currently, there are 305,108 CCW permit holders in Michigan.  After Sen. Green passed the ‘shall issue’ policy in 2001, permits soared (53,000 were approved in the first year).  Hopefully this new bill, if passed, precipitates a similar upswell in CCW holders.