The Dark Side of the Force?: Black Guns vs. Classic Wood & Steel Models

I was having a Facebook chat with a non-shooter friend and at one point I mentioned something to her about firearms. The conversation that ensued got me thinking about the strange emotional divide that exists between “classic” guns made of wood and steel and “black guns” made of polymer and then ultimately about how the aesthetic appeal of a weapon really influences the public perception of firearms (even helping to dictate public policy in the form of gun control).  But we aren’t there yet, so here is an excerpt from our chat that illustrates a bit better exactly what I’m talking about:

Me: I’ve doing the Ballistics by the Inch project for some time now but I’ve also been writing for Guns.com.

FB Friend: O yeah, I forgot you are a gun person. I think guns are lovely.

Me: Yeah, that’s a big aspect of why I’m into them: an appreciation of the engineering and innovation that went into making them.

FB: lol. I meant more than that. But sure.  I think guns bring something gratifying to the table, and I don’t mean in some lame Freudian way. They feel good in the hand, like their heft is sensual almost. They look pretty.  Even the way they come apart and reassemble is also pleasing in a way that’s not only aesthetic, it’s almost physically gratifying.

Me: All true. I think that may be one of the reasons that some people don’t like the so called ‘plastic’ guns. Hmm. Food for thought.

FB: Yeah, metal and wood feels much better than plastic.

From whence we came

There was a time not that long ago when all guns were pretty much one-of-a-kind works of art, created by highly skilled craftsmen for clients willing to pay for their quality.  That is to say, at one time guns were really tools or toys for those Americans with substantial means. In the US, these cottage gunmakers were often located in Pennsylvania or Kentucky, hence the name Kentucky or Pennsylvania long rifle. This price point exclusivity changed drastically though, when the confluence of two major events—the settlement of North America and advent of industrialization—presented a blossoming firearms industry with both the demand for affordable and functional small arms and the means to lower costs and increase production rates.  The resulting market surge flooded the United States with firearms (and gun tycoons’ bank accounts with profits).

It also made American makers like Colt, Winchester, Browning and Smith & Wesson household names and perhaps represents the genesis of when firearms and American culture and iconography first became enmeshed in the imaginations of so many world round.

However, not withstanding these historical factors or man’s simple desire to have a weapon, I think one reason why guns were so readily accepted (and remain largely accepted) by the public, was because, even though 19th and early 20th gun manufacturers experimented widely with design, they still incorporated the older cottage industry thinking when it came to both the level of craftsmanship and the material selection.  After generations of watching small arms “evolve” into something personalized and beautifully crafted, the average person expected guns to have a look that complemented the deadly seriousness of what the weapon was capable of (i.e. killing people) and this meant finer materials and engineering.

I mean just consider this: even the mass-produced Colt Peacekeepers had an elegance and beauty about them with their rounded edges, high quality ornaments and ergonomic versatility. Today revolvers have been generally relegated to role of concealed carry guns and become plainer and more utilitarian—designed for specific function rather than general use by the shooter that owns it.

Come to the dark side

It also seems to me that our emotional attachment to wood and steel charts much of our basic firearms vocabulary.  For example, if I say “Dirty Harry” or even just “.44 Magnum” most people will envision something like the S&W 29 with a long barrel.  If I say “Tommy Gun,” almost anybody would be able to conjure up an image of a classic Thompson submachine gun.  Even if you say something a little more vague like “hunting rifle,” chances are folks will picture a bolt-action gun, something along the lines of a Remington Model 700.

All of these iconic guns have classic lines and wood stocks and I would bet most anybody would be able to recognize them to some degree.  But I also think this familiarity works to make them “warm,” almost “friendly” in people’s minds (which is not what I think our shooting fathers were going for when they used the finest materials to craft guns out of). 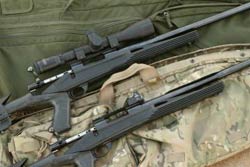 Now, say “black rifle” and what mental image do you think most people have? Usually nothing, but for those familiar with the term, rarely do I find that they find the image comforting.  How about just using the name “Glock”—which has almost become a generic term for ‘any plastic gun’ in the minds of most non-gunnies.  I can tell you with all the bad press Glocks get, the homely little gun doesn’t generate much warmth on looks alone.

Don’t think it’s only people who don’t shoot who are susceptible to these aesthetic judgments. Hell, most gun writers and even owners call Glocks “ugly” – as in “ugly as sin, but very functional.” I’ve done that and I’ve even taken the position many times before that I dislike polymer stocks of almost any sort, while I have gone out of my way to praise wood stocks on many guns.

And why not?  If you were planning on buying supposedly a high-end gun, wouldn’t you expect that it would have a nice wood stock? I do. In fact, many premier gun manufacturers offer different quality levels for their wood stocks, with fancy or exotic wood commanding a higher price. And there’s a huge number of after-market manufacturers of grips for all manner of revolvers, not to mention 1911s.

As my Facebook friend said: “Metal and wood feels much better than plastic.”

Don’t judge a gun by its finish

Overall, this thinking is pretty harmless; most people are smart enough to recognize their aesthetic bias and not import it to other areas of their life. However, when people prey on these biases—that’s when I believe they become a problem.

One excellent example of this is the absurdity of the Assault Weapons Ban in the early ’90s.  To the thinking of many gun owners, this ban effectively criminalized a certain aesthetic – polymer functionality – while ignoring the more genteel “steel and wood” guns that were no different in terms of firepower or effectiveness.  People who actually understand guns were appalled by the ridiculousness of the AWB’s emphasis on superficial features, but it was passed because of how easy it was to garner support “against these evil (looking) weapons.” Another were the bullshit stories about a “ceramic Glock” which didn’t contain enough steel parts to be detectible by X-ray machine or metal-detectors. There’s a bias against plastic.

I’m not saying that firearms manufacturers should get away from the use of polymers. I own a number of guns with polymer stocks, and think that it is decidedly superior for many applications, not the least of which is helping to keep the cost down on many firearms. But I still love the warmth and familiarity of wood stocks, and I think that it is understandable that many people who don’t understand guns, who don’t own them, feel the same way. Historically, that’s what they’re used to. Just give them time, help educate them when you can.